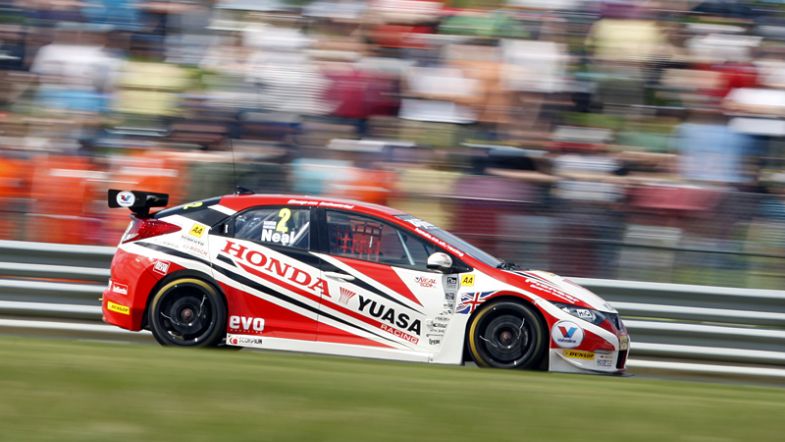 Honda Racing Team’s Matt Neal took his second win of the day in a thrilling race at Thruxton, ahead of the impressive Tom Onslow-Cole and the charging Gordon Shedden.

Neal led away from the start and held his lead throughout, with Onslow-Cole going one better than the first race in his Tony Gilham Racing Volkswagen CC, and Neal’s team-mate Shedden coming through to third from 25th on the grid.

In a breathless race, Eurotech Racing’s Andrew Jordan also battled through from 11th on the grid and challenged Onslow-Cole for second on the final lap, but a huge slide at Church allowed Shedden to pass him on the run up to the chicane.

Adam Morgan kept up his 100 per cent points finishing record in eighth in the Ciceley Racing Toyota Avensis, with Jack Goff taking his best result so far in ninth in the Tony Gilham Racing Vauxhall Insignia, and pole position for the reverse grid final race.

Aron Smith completed the top 10 in his Motorbase Performance Ford Focus after a huge spin at Church on the opening lap, while Lea Wood took Jack Sears Trophy honours in 20th overall in his JWT Performance Vauxhall Vectra.

Plato pressured Neal in the opening laps ahead of Onslow-Cole, but the race was neutralised on lap five thanks to a huge crash at the final chicane for Dan Welch’s Welch Motorsport Proton Persona.

After the restart, Jordan quickly passed Sam Tordoff and team-mate Smith, passing Plato at Allard on lap 16. Shedden, who had made it up to 11th before the safety car, was seventh by lap 11, fourth on lap 16 and finally third on the last tour.

Just ahead of the pair, Onslow-Cole passed Plato to move up into second at Allard on lap 13, and held off the marauding Honda Civics to the flag.

Neal and Plato are now tied at the top of the standings ahead of the final race of the day at 17:17 BST.