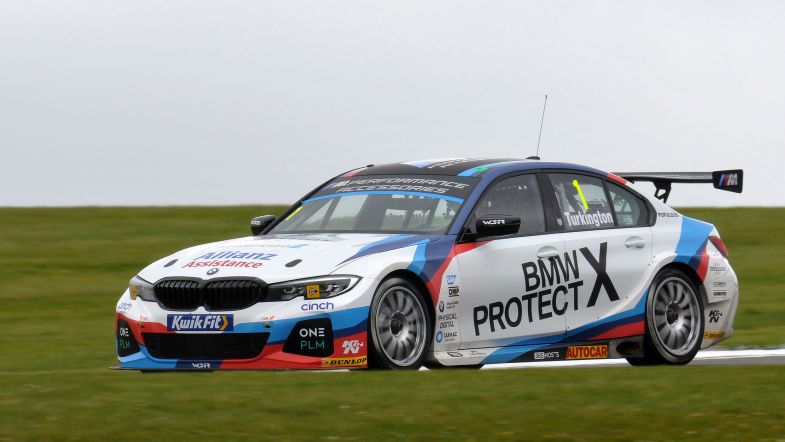 The reigning champion converted his pole position in his BMW 3 Series to lead home Team BMR’s Ash Sutton in his Subaru Levorg by more than two seconds, with team-mate Tom Oliphant coming home third for his first podium in the BTCC.

It was a second race win in two weekends for the new 3 Series, but the race will be best remembered for a series of incidents and accidents which removed no fewer than six runners from the race.

The safety car was deployed almost immediately after a huge incident at the Old Hairpin on the opening lap. West Surrey Racing’s Andrew Jordan appeared to get a tap from behind and spun, before taking a heavy hit in the left hand door from Ciceley Motorsport’s Adam Morgan, who looked winded as he exited his Mercedes A-Class.

Team Parker Racing’s Stephen Jelley and the Honda of Matt Simpson were also caught up, the latter pitting with his bonnet up and stopping, while Motorbase Performance’s Ollie Jackson spun in avoidance and collected Trade Price Cars Racing’s Jake Hill, with both retiring on the spot.

After six laps under caution, the action got back underway on lap eight, but this was short-lived as Motorbase Performance’s Nicolas Hamilton had a significant off at the final corner in his Ford Focus ST after contact with Laser Tools Racing’s Aiden Moffat. The safety car was deployed again, but not before a significant moment for earlier championship leader, BTC Racing’s Josh Cook.

Nursing his Honda Civic FK8 on hard tyres with full ballast, Cook defended from AmD Tuning’s Sam Tordoff in the older FK2 Civic as the Yorkshireman pitched his car around the outside of Coppice.

The two ran side-by-side into the final chicane before making heavy contact, with Cook limping around for a lap before pitting with a damaged wheel.

Tordoff’s joy was short-lived as he spun away third place at the chicane on lap 12, allowing former Ginetta man Oliphant into the final podium position.

After the chaos of the opening laps, the closing stages were calm by comparison. Behind the top three, Team Dynamics’ Matt Neal held off Speedworks Motorsport’s Tom Ingram to take fourth, with team-mate Dan Cammish just behind in sixth.

Several teams now have extensive repair work to do before the second race, which takes place at 14:30 BST.