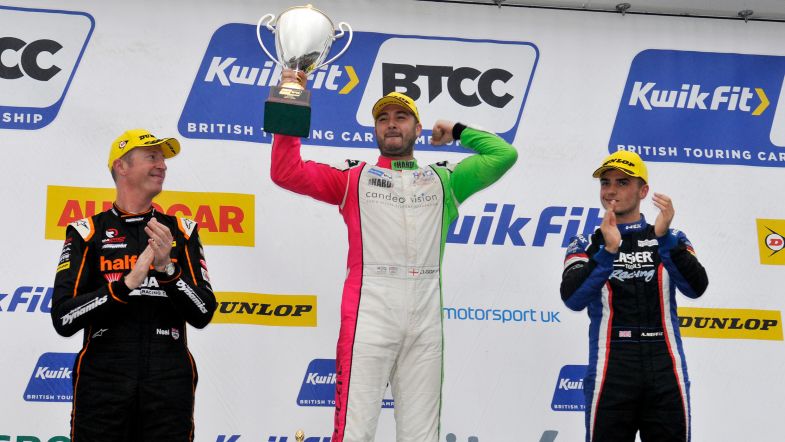 Team HARD has announced that it has agreed a deal to retain the services of Jack Goff for the 2020 British Touring Car Championship season.

Goff returned to Tony Gilham’s team at the start of 2019 having secured a last minute deal to replace Mike Bushell in the four-car Volkswagen line-up, and would endure a tough campaign up to Silverstone – where a brave call on tyres saw him secure a first win of the team in wet conditions.

The 28-year-old becomes the first driver confirmed with Team HARD for 2020 and said he was excited about the potential for improvement in his second year with the team that gave him his series debut back in 2013.

“It’s a pleasure to re-sign with Team HARD,” he said. “We made some good progress across the year with limited testing opportunities, and with the testing plan we have in place, I am confident of making big strides with the car and the team for the 2020 season.

“Tony showed faith in me by putting me in the car at the last moment for the 2019 season, although we knew we would be up against it with no pre-season testing.

“I was delighted to be able to repay the team with their first BTCC victory at Silverstone, which was the biggest highlight of the year. I am now looking forward to getting started again with the lads at HQ and my engineer Adam to make sure we hit the ground running at the start of the season.”

Team boss Gilham admitted he was delighted to be able to keep the five-time race winner onboard for another season.

“It is great to have Jack back for another season with the team and the Volkswagen CC,” he said. “2019 was a whirlwind for Jack after securing the drive just two days before media day, but he was on the pace right from the get-go and spent the 2019 season as a testing year after missing the entire winter. Despite this he still managed to pick up the teams first overall win in one of the most exciting BTCC races I’ve seen for a while, a moment this team will never forget.

“I’m excited to have Jack onboard and confirmed this early into the winter break, it gives Jack time to run through our winter test programme and make the required changes to suit his driving style.”