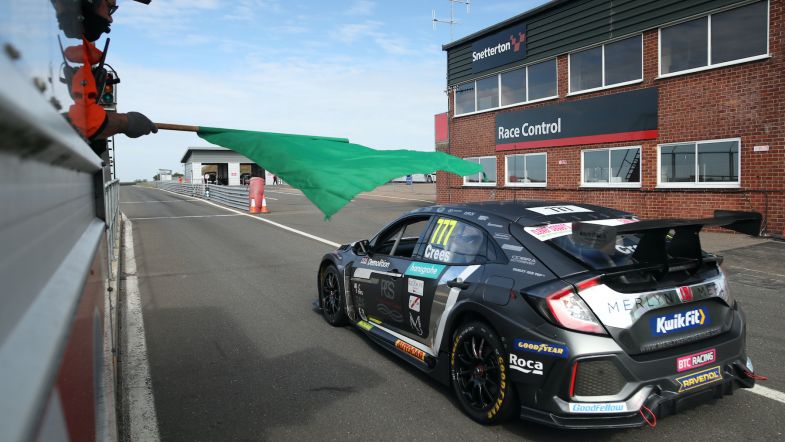 Michael Crees admitted that he was “buzzing” on the back of an eye-catching performance in the annual two-day BTCC tyre test at Snetterton.

The second-year racer was a solid eighth in the only dry session of the test on Tuesday morning but then produced an impressive lap on the second afternoon to emerge with the fourth quickest time in Wednesday’s wet running, outpacing more experienced team-mates Josh Cook and Tom Chilton in the process.

It left the 36-year-old feeling confident about his chances when the new season kicks off at Donington Park next month.

“The boys have worked so hard over these two days, so to come away eighth and third fastest at the end of the two days is a brilliant way to repay them,” he said. “I’m buzzing now; it was a great result for me.

“I hit the ground running in the dry on day one, but it was tough running in the wet and it took a while to find the right set-up. Every time I’ve got back in the car, I’ve gone quicker. I can’t ask for more than that. I can’t wait to get started now.”

Whilst Crees was the quickest of the BTC trio in the wet Wednesday sessions, it was Chilton who was fastest on day one with a time that saw him end up second quickest across the full test to the Motorbase Ford of Rory Butcher.

“It’s been a really positive couple of the days for the team,” he said. “We’ve learned a huge amount about the cars. I’ve come away from Snetterton with a good understanding of how the FK8 behaves in the wet and dry. That’s going to be a great benefit going into the start of the season.

“The dynamic between the three drivers worked well, and we all now know where we need to be. It was also a good opportunity to get to know my new engineer before we start racing.”