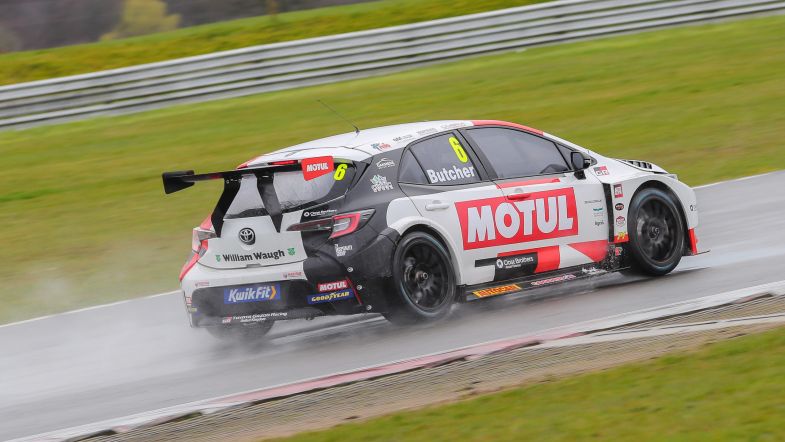 Rory Butcher says he has been left feeling ‘buoyant’ after his first test in the Speedworks Toyota Corolla that he will drive in the BTCC this season.

Butcher has switched to the Toyota Gazoo Racing UK-backed team for 2021 as a replacement for Tom Ingram, and will be partnered by Sam Smelt in an expanded two-car line-up.

Testing at Donington Park and Snetterton provided Butcher with his first chance to sample the race-winning Corolla and early impressions were positive.

“It felt great to return to a circuit for the first time in a while and to get my ‘race head’ back on,” he said. “I always do a lot of preparation and training at home, but there’s nothing like actually arriving at the track and knuckling down to work, and to benefit from a proper block of test days to really get a feel for the Corolla was ideal.

“I’m quite fortunate in that this is the fifth car I have driven in the BTCC in less than four years, and I think that prior experience unquestionably helps. I know what a good car feels like and I know what a bad car feels like and I’ve got to say, the Corolla is very confidence-inspiring, which encouraged me to push the limits and take risks earlier than I had been anticipating, without fearing that it would punish me when I asked for a little bit more. That’s exactly what I want out of a car.

“The Corolla gave me all the right feedback and definitely lived up to my expectations, and after just my first few laps at Snetterton, I came back in and said, ‘there’s really not a lot I would change’ – it honestly felt that good. I came away feeling pretty buoyant, and I genuinely think we’re in a very strong place at the moment.”

Team-mate Smelt – who drove the car at Croft late last year – was also pleased with the way the opening two tests had gone despite some early issues on his car.

“We encountered a few teething troubles with my car to begin with, but it was good to get them out of the way earlier rather than later and once they were resolved, the Corolla ran faultlessly,” he said. “It was a shame that straight after I began my first representative run on new tyres at Snetterton, it began to rain, but it’s important to get wet-weather experience too and I was able to put a fair few laps on the board, which helped me to become more comfortable in the car and establish a good feel for it.

“Overall, these first few days felt like a little taster for me, but one that hinted at a lot of potential. I’m very optimistic that we will have a strong all-round package this year, which means it will come down to how quickly I can get up-to-speed between now and the start of the season. I’ll tell you one thing – I already can’t wait to get back out on-track!”