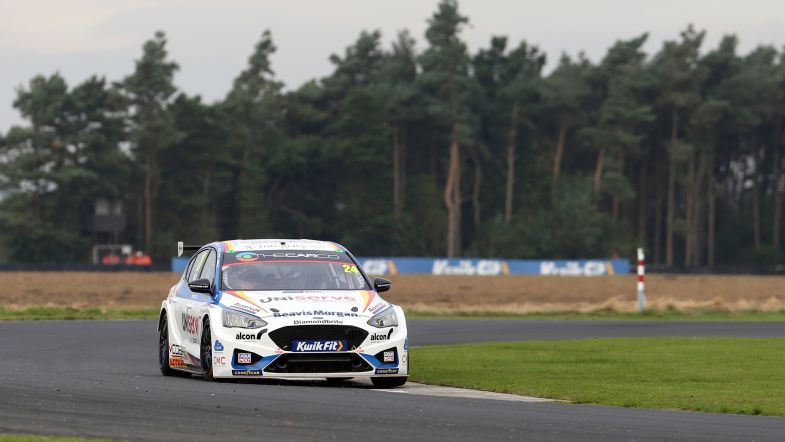 Jake Hill made it two new winners in the 2021 British Touring Car Championship in as many races with victory in the second race of the weekend at Croft.

Having finished second in the opening race of the weekend behind Aiden Moffat, Hill went in to race two looking to go one better but it was the Infiniti that led the field away when the lights went out.

As the field squabbled behind – with Turkington forced to cut across the chicane – Hill looked to find a way through into the lead and saw his chance going into the complex as he took the outside line through the left hander to then take the inside line for the right hander leading to the hairpin.

Hill duly swept through into the lead and from that point on, he was untroubled at the front – even though the safety car would be put out at the end of the opening lap when Rory Butcher went off after contact at the complex. Tom Oliphant would also retire with suspension failure exiting the chicane.

When the race resumed on lap six, Hill charged away at the front and would be rewarded with the biggest winning margin of the season with all eyes on the battle behind.

Running maximum weight for the first time, Moffat round himself defending from Senna Proctor, Josh Cook, Colin Turkington and Ash Sutton – with Cook having got ahead of Turkington on lap one thanks to a forceful move at Tower.

Sutton would try to find a way ahead of Turkington without success at the hairpin but it would be lap nine before there was a change in the pack, with Cook diving down the inside of team-mate Proctor into Sunny to move third.

Turkington tried to follow through only for Proctor to defend, but the BMW then managed to sneak through a lap later into fourth with title rival Sutton going backwards after both Gordon Shedden and Tom Ingram got ahead on the exit of Tower.

Turkington was pushing Cook for third but that left him vulnerable from behind and as Cook defended going into turn one, Shedden made a move for fourth and ran the BMW wide through the gravel.

That put Turkington off line as he then slipped back down the order, with Shedden also losing position to both Sutton and Ingram as they briefly swapped places before Ingram reclaimed the spot at the hairpin.

Moffat would manage to hold on ahead of Cook to secure second place, with Cook himself having enough of a gap over Ingram that he wouldn’t close in on the podium battle and had to settle for fourth.

Sutton took fifth spot ahead of Shedden and Turkington, with a late move on Proctor not only giving Turkington seventh spot, but also pole for race three when the grid draw was carried out by Alan Gow.