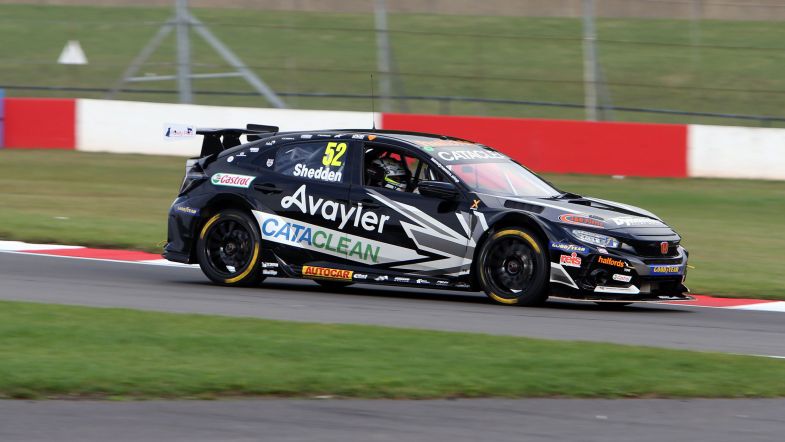 Gordon Shedden topped the times in the showdown session to grab pole for the latest rounds of the BTCC season at Donington Park.

The opening phase of qualifying was all about getting through to the top ten showdown, with the Honda of Senna Proctor leading the way in what would prove to be a tight session with the top ten covered by three tenths of a second.

Colin Turkington was second quickest in the BMW as he stepped up his pace from qualifying, with Dan Rowbotton and Ash Sutton behind; the points leader once again making the most of the pace of the Infiniti despite carrying maximum ballast.

Shedden, Chris Smiley, Rory Butcher, Dan Lloyd, Josh Cook and Jason Plato completed the ten to make it through, with Adam Morgan the man who just missed out in eleventh having set the pace earlier in FP1.

Tom Ingram and Jake Hill would go close despite the additional weight on their car but had to settle for twelfth and 13th on the time sheets, with Tom Oliphant and Aiden Moffat two drivers who would have hoped for more as they could only secure the 18th and 21st best times.

Having impressed in practice Jack Mitchell and Sam Smelt would also drop down the order to end up outside the top 20.

Into Q2, Turkington was the first driver to set a quick lap but he was quickly overhauled by Sutton and Cook – the latter making the most of a tow to go onto provisional pole.

The pair were then stripped of their laps for exceeding track limits which moved Smiley onto pole only for him to also lose his lap, putting Turkington back onto pole.

The BMW driver improved his time but was then shuffled back to third by Plato and Rowbottom before the latter lost his time, but improvements were still coming thick and fast.

Proctor was next to hit provisional pole before a storming lap from Shedden saw him break the 1:09s marker, with Lloyd’s Vauxhall storming to second.

Shedden improved again on the next lap to extend his advantage and it would prove to be enough to give the Scot pole, with Lloyd taking second and Plato securing third having failed to improve on his final timed lap.

Butcher took fourth in the Toyota from Proctor and Turkington, with Rowbottom and Smiley sharing row four.

Sutton had to settle for ninth after a trip across the gravel at Coppice on his final flyer, with Cook rounding out the top ten.