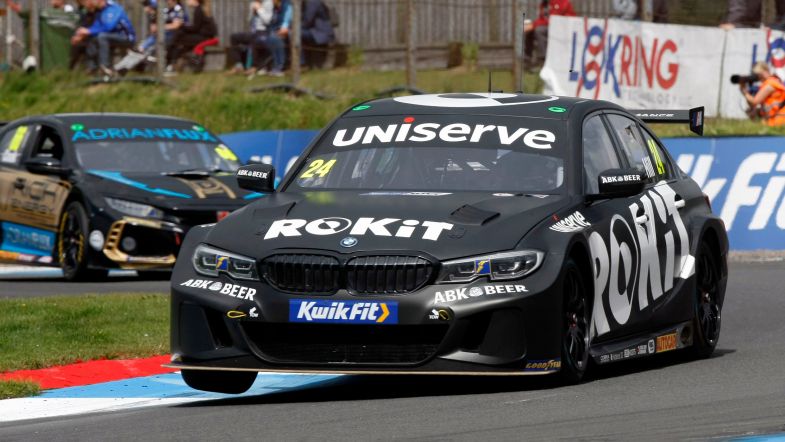 Jake Hill saw off the challenge of Ash Sutton to secure his second win of the BTCC season in the opening race of the weekend at Knockhill.

Hill started the race from pole position and kept the lead at the start, but Ash Sutton was on a mission to get ahead and having tried to get ahead at the hairpin at the end of lap one, he ran alongside the BMW over the start/finish line before sweeping ahead into turn one.

From there, Sutton came under huge pressure from Hill as he got the tyres on the BMW up to temperature, with the Motorbase Ford forced to take defensive action to keep his spot at the front.

At the end of the fifth lap, Hill hit the rear of Sutton at the hairpin before then drawing alongside the Focus across the line only for Sutton to retain the lead going into turn one, with Hill then trying again a lap later and getting ahead at turn one only for Sutton to come back at him into McIntyres to reclaim top spot.

However, Sutton’s hold on the lead would finally be ended when Hill managed to get the inside line for turn one going into lap ten and the BMW swept ahead before easing away to take the win.

Sutton then found himself forced to fight hard to keep Colin Turkington at bay, with contact between the pair at the hairpin as they diced over second spot, with Sutton able to hold on to grab second ahead of Turkington, with Stephen Jelley taking a watching brief behind the pair throughout to take fourth.

Jelley was helped by Adam Morgan hitting issues on the green flag lap that saw him unable to take up his place on the and instead start from the back of the grid, with his Ciceley team-mate George Gamble taking fifth spot having seen off the challenge of points leader Tom Ingram.

Ingram has fought his way ahead of Aiden Moffat and Rory Butcher early on to work his way up the order, with a big gap behind to Gordon Shedden’s Honda – which had battled forwards from outside the top ten to take seventh.

Shedden grabbed the spot after a late move on brother-in-law Butcher in eighth, with Dan Cammish and Ricky Collard rounding out the top ten.

Josh Cook endured a troubled race that included a moment at the hairpin mid-way through and ended with him back in 15th spot, one place behind the recovering Morgan who stormed through the pack to 14th at the finish.