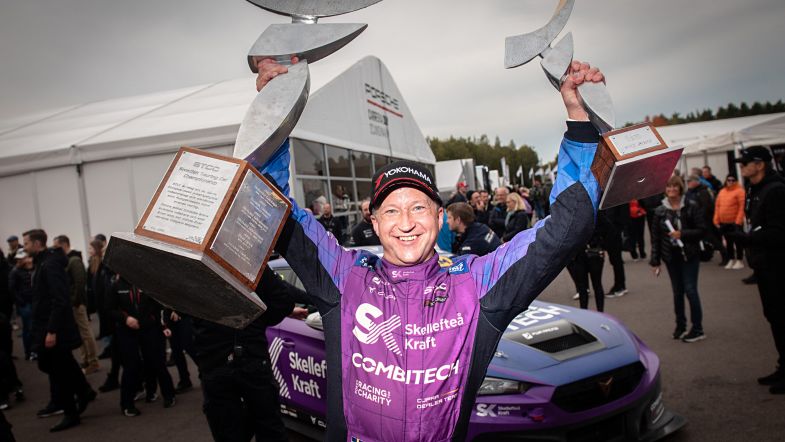 STCC TCR Scandinavia champion Robert Dahlgren has revealed that he is out of contract at the end of the year, but said “the odds have hardly worsened” for a return to the championship as it ushers in a new all-electric era in 2023.

Dahlgren sealed his fourth STCC title on Saturday as the 2022 campaign drew to a close at Mantorp Park, backing up previous successes in 2017, 2019 and 2021.

All of those titles have come with the Cupra-affiliated PWR Racing team, and Dahlgren was quick to praise the job done by the squad in a season of abundant competition.

“It’s a magical feeling,” Dahlgren said to TouringCarTimes. “I’m absolutely elated to win and the team has done a great job. The level of competition is the highest it’s been for many years in the STCC. We’ve gone up against the likes of Lestrup and Brink, who are both great teams, and some really strong drivers. We have worked very hard, genuinely, for this, so to win it is fantastic.”

Expanding on his emotions, Dahlgren carried on.

“I will never forget my first title in 2017. That’s the one closest to my heart as I’d tried for such a long time, and it came at a point when I’d almost begun contemplating retiring.

“What’s special about this one is I’m particularly happy to have done two (titles) in a row. My trend has been to win one every second year, so I’m happy to have bucked that! Now let’s just continue…”

There is uncertainty surrounding Dahlgren’s future, however, after the new champion confirmed to TouringCarTimes that his current contract runs out at the end of the year.

Furthermore, PWR Racing are yet to formally confirm whether they will actually run a team in the STCC next year, although there is a strong common understanding in the paddock that the multiple champions will indeed carry on – with its offshoot business EPWR building all new cars for the incoming electrical regulations.

“My contract expires now, so I’m open for negotiations,” Dahlgren said. “I guess the odds of continuing have hardly worsened after today. I really want to continue racing, and winning. I love the sport, I love to compete, and the way we have faced this challenge this season, it just makes me very motivated for more.”

PWR Racing co-founder Daniel Haglöf offered a small hint as to what might come, perhaps, when asked about his stance on Dahlgren’s contractual situation: