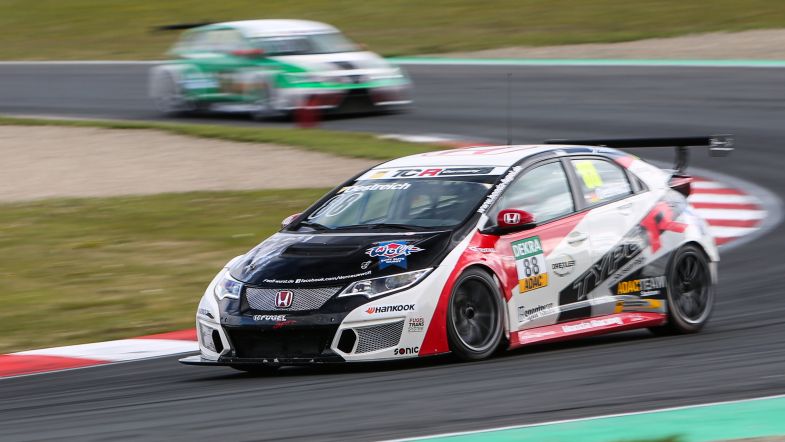 Moritz Oestreich wins the first race of the weekend at Oschersleben

Honda Team ADAC’s Moritz Oestreich took his first career win in the TCR Germany series at Oschersleben, leaping into the lead from third on the grid at the start and controlling the pace, finishing ahead Pascal Eberle’s Steibel Motorsport SEAT León TCR and Luca Engstler’s Volkswagen Golf.

Dutch driver Niels Langeveld started from pole position in the Racing One Audi RS 3 LMS, but was swamped into the first corner by Oestreich’s Honda, with Kris Richard also making his way into second position, with Langeveld hung out to dry at the outside of the first corner, dropping to fifth behind Eberle’s SEAT and Luca Engstler’s Volkswagen.

Further down the order, reigning champion Josh Files was making quick progress from 14th on the grid, and was up to seventh by the end of lap one. The British driver then moved up to sixth and began challenging Langeveld’s Audi for fifth position.

On lap four, Simon Larsson crashed out his Target Audi RS 3, while Files then made a mistake and lost a spot to the ADAC Honda of Steve Kirsch.

The safety car was soon deployed as Larsson’s car was recovered from the barriers, with the race resuming on lap nine.

Oestreich and Richard began to pull away up front, while Langeveld made a mistake at Turn 9, allowing Kirsch to move his Honda ahead, but the Dutch driver then tapped the rear of Kirsch’s Civic, knocking him into a slide and pushing him out of the top ten.

Files was now back in play, and managed to make his move on Langeveld on lap 13 and took fifth, but the Brit then made a mistake on lap 14, cutting across the grass and dropping five positions, and would go on to finish in tenth position.

Oestreich controlled the pace up front ahead of Richard, who was right behind the fellow Honda up until the end of lap 17, when his engine caught fire, with the Swiss driver immediately pulling over and retiring from the race.

Eberle was promoted to second, crossing the line just six-tenths behind Oestreich after 18 laps, with Engstler third, 1.5 seconds behind in the best-placed Volkswagen.