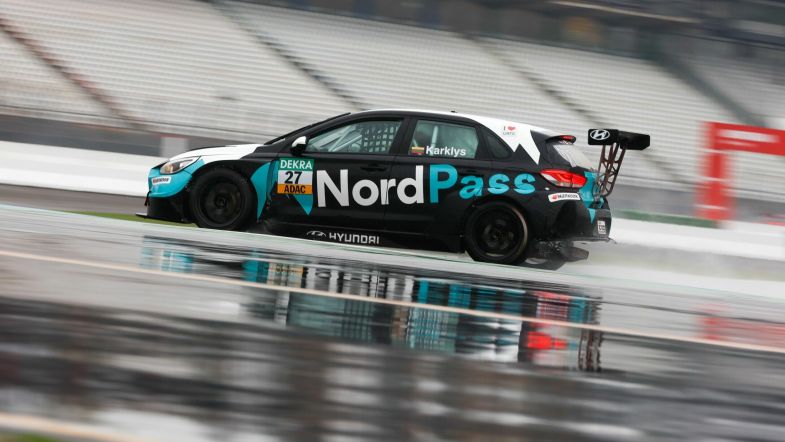 NordPass Hyundai’s Jonas Karklys will start from pole position for the penultimate TCR Germany race of the season after topping a red flag affected qualifying session at Hockenheim.

The Lithuanian driver, who was second in the afternoon’s free practice session, posted a best time of 1:48.403 to put himself over three-tenths of a second clear of Team Engstler’s Szymon Ladniak.

Series champion Martin Andersen was only fifth at the end of qualifying, while car problems following FP2 meant that Comtoyou Racing’s Jessica Bäckman failed to set a time.

She will line up 12th on the grid, alongside the Honda of Albert Legutko who also didn’t set a lap-time.

Bäckman, who comes into this weekend’s pair of races second in the drivers’ standings, was left stranded in the pits after a heavy crash in second practice caused damage to her Audi RS 3 LMS.

Comtoyou did receive some assistance from rival team Gruhn Stahlbau Racing, who also run an Audi for Max Gruhn, but Bäckman’s qualifying was over.

That left the Hyundai of Karklys and the Honda of Ladniak to do battle at the top of the pile, with Karklys producing the quickest time of the weekend to take pole.

Ladniak could not improve on his penultimate lap and ended up 0.343s adrift of the Hyundai, with the Holden of Maurer Motorsport’s Vincent Radermecker taking a surprise third on the grid.

Having shown well enough in free practice, the ROJA Motorsport Hyundai Velosters occupied three of the top 10 positions, with Robin Jahr the highest placed in fourth, one spot ahead of Andersen.

Team-mates Tim Rölleke and René Kircher will start right behind in sixth and seventh respectively, while the RaceSing Hyundai i30 N TCR of Patrick Sing will start eighth.

Roland Hertner and Max Gruhn completed the top 10 who set a lap-time.

Race one for TCR Germany is scheduled to begin tomorrow morning at 11:35 CET.