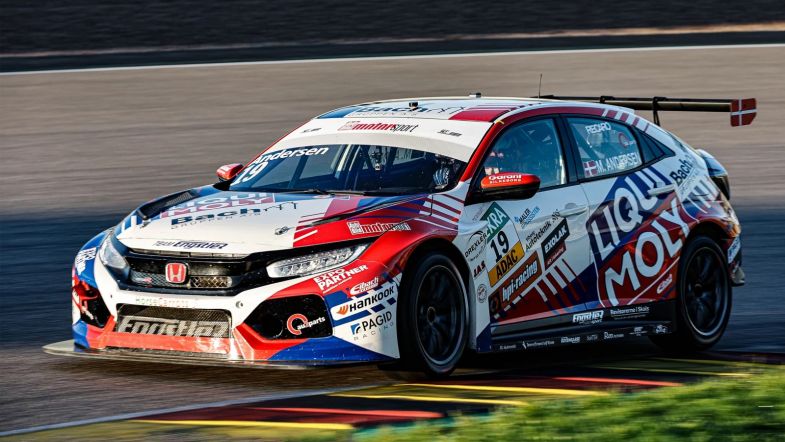 Martin Andersen dominated the first TCR Germany race at the Sachsenring which was red-flagged with two minutes left after a big crash by his Team Engstler team-mate Roland Hertner.

Andersen made a perfect start from pole position while Jonas Karklys stalled from third on the grid, dropping to the back of the field.

Comtoyou Racing driver Jessica Bäckman started second but had a dreadful lap where she dropped down to fifth place.

Instead it was Andersen’s team-mate Szymon Ladniak who claimed second place, coming under intense pressure from René Kircher at mid-point of the race.

Kircher nudged Ladniak’s Honda during braking for the final corner with ten minutes left of the race, making the move stick for second place.

But the stewards ordered Kircher to fall behind Ladniak after the incident. The issue for Kircher was that Ladniak had falled down to fifth place behind Niels Langeveld and Jessica Bäckman, meaning Kircher had to let both those drivers past as well to get behind Ladniak.

Langeveld and Bäckman found themselves on the podium right at the end of the race due to the penalty for Kircher.

But the race came to an early end as Hertner put two wheels outside of the track and spun to the inside of the track, hitting the barriers hard. The Honda driver escaped unharmed while his Honda received a lot of damage, as did the barriers, bringing the red flags out.

The results were set one lap before the red flags came out as per the regulations, meaning that Andersen won the race 12 seconds ahead of Langeveld who scored a podium finish on his debut for Maurer Motorsport.

Kircher finished fourth ahead of Karklys, who fought his way back up to fifth after stalling at the start, while Ladniak rounded off the top six.

The second race of the weekend starts at 11:35 CEST tomorrow.