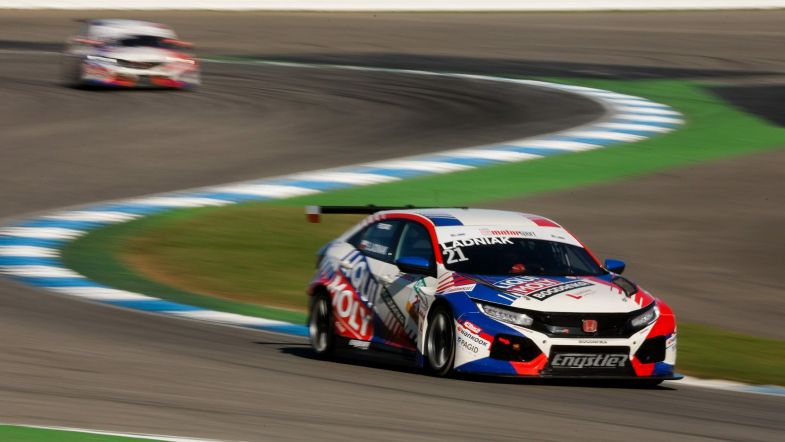 Team Engstler’s Szymon Ladniak completed a superb lights-to-flag performance to take a clean sweep of victories at Hockenheim, as the TCR Germany season came to a close.

Having won the opening encounter, Ladniak claimed pole position in dominant fashion in Saturday evening’s qualifying session and duly led every lap to claim the win.

Comtoyou Racing’s Jessica Bäckman finished second and with it secured second place in the drivers’ standings but two points from Ladniak, while series champion Martin Andersen was third.

Off the start, Ladniak got a great getaway as Bäckman used the cleaner side of the track to usurp Andersen as the pair went side-by-side into turn one.

Further back, Vincent Radermecker (Maurer Motorsport Holden) dropped down the order after a poor start.

Conversely, NordPass’s Jonas Karkly made progress from sixth on the grid to run fourth, ahead of ROJA Motorsport’s René Kircher and Robin Jahr.

While Ladniak stretched his margin at the front to over three seconds from Bäckman, Radermecker began his fightback through the field, jumping back up to sixth.

The touring car veteran then became embroiled in an entertaining scrap for fifth with Kircher, with the Holden attempting to go around the outside at turn six.

Contact was made and Radermecker was tipped into a half-spin but both carried on. The following lap, Kircher locked his rear brakes at the hairpin which allowed Radermecker to dive up the inside to take the position.

Radermecker then closed on Karklys for fourth and made it around the Hyundai after a well-judged switchback move at the exit of the hairpin.

Further down the order, Team Engstler’s Roland Hertner and RaceSing’s Patrick Sing were also squabbling for position, with the pair swapping places twice before Sing secured eighth at the finish.

At the front, Ladniak’s lead came down to just under two seconds by the end as Bäckman staved off race-long pressure from Andersen to consolidate second on the road and in the championship standings.

Behind Radermecker, Karklys was fifth, with Kircher leading his ROJA Motorsport team-mate Tim Rölleke who had something of a quiet race in his Hyundai Veloster.

Sing finished eighth ahead of Hertner, while Michael Maurer was the last of the classified runners, one lap down in 10th.