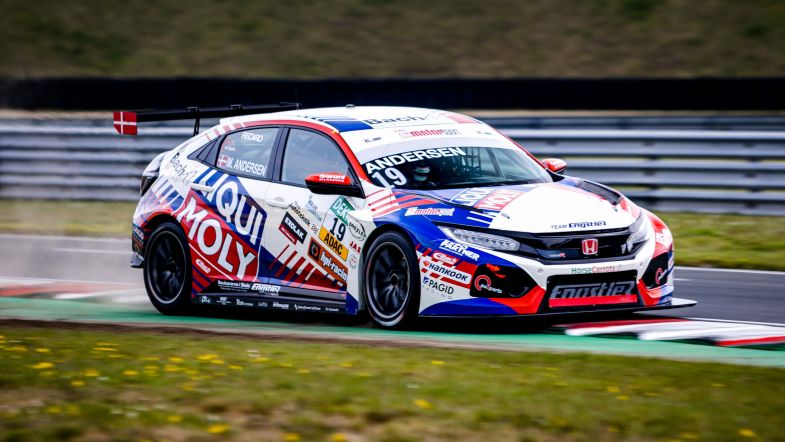 Team Engstler’s Martin Andersen remains the driver to beat in the TCR Germany season finale at Hockenheim after setting the fastest time in second practice.

The Dane, who was crowned series champion at the previous round at the Sachsenring, set a best time of 2:03.005 which was only marginally quicker than the Hyundai i30 N TCR of Jonas Karklys.

With rain affecting the morning running, the second session took place in largely dry conditions. Comtoyou Racing’s Jessica Bäckman set the early benchmark time of 2:06.245 but the times would soon tumble rapidly over the course of the session.

ROJA Motorsport’s Tim Rölleke then moved to the top of the times, which sparked a swathe of improvements from most of the field as track conditions got better.

Ladniak then went fastest while Bäckman moved up to second, the latter having struggled slightly in the morning session, but both were soon beaten by Rölleke before a brief full course yellow period.

Perhaps waiting for the track to reach its optimum grip level, Karklys’s first representative lap-time was good enough for fourth before going to the top of the pile on his second lap, just six-hundredths of a second quicker than Rölleke.

Andersen was somewhat notable by his absence but the Honda driver put in a superb effort to beat Karklys by over seven-tenths of a second.

A small flurry of improvements in the final minutes of the session enabled Andersen to lower his benchmark time and for Karklys to get to within a few hundredths for second.

Ladniak finished third, while Robin Jahr put in a late effort to take the fourth fastest time, as Bäckman brought out the red flags in the final minute after crashing.

Qualifying for the penultimate race of the season is scheduled to take place later on today at 17:40 CET.