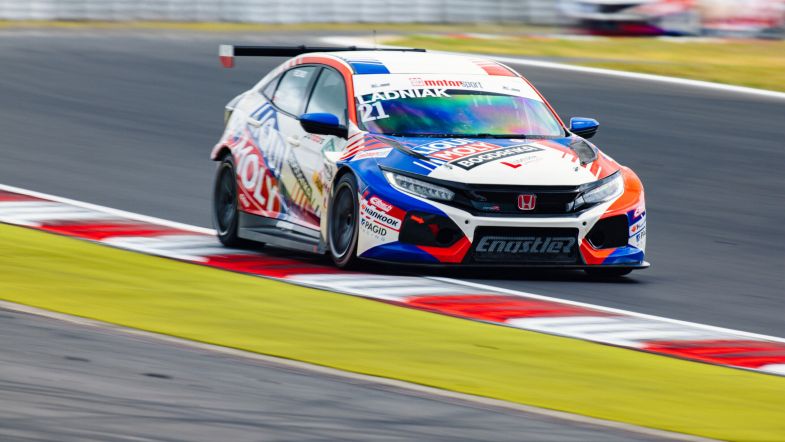 Team Engstler’s Szymon Ladniak kept clear of all the action behind him to claim victory in the penultimate race of the TCR Germany season at Hockenheim, which ended under the safety car.

The Honda Civic Type-R driver started second but made the most of a poor getaway for polesitter Jonas Karklys to take a comfortable win from his team-mate and series champion Martin Andersen.

Vincent Radermecker was denied the final step on the podium as his Maurer Motorsport Holden ground to a halt on the final lap, under safety car conditions, giving Karklys an unexpected third place.

Karklys bogged down heavily off the line and was swamped by the quicker-starting Ladniak and Robin Jahr as the field negotiated the first corner. Radermecker also made it past Karklys at turn two as the NordPass Hyundai compounded his bad start by running wide on the exit of the turn two.

Radermecker then tried to get ahead of Jahr at the turn seven kink towards the Mercedes Arena but nearly lost the back of his Holden as the pair went side-by-side. Jahr also lost ground before the end of the opening lap, running briefly through the gravel at the stadium section, allowing Karklys into second and series champion Andersen to third.

Meanwhile, Ladniak had bolted away from all the action behind and built up a staggering lead of over three second as Karklys was forced to drop three positions – to behind Jahr’s Hyundai – after it was deemed that he had overtaken off track.

With Karklys penalised, Andersen moved up to second place and the Dane began his pursuit of Engstler Honda Civic Type-R team-mate Ladniak in the lead.

The order remained stable for a number of laps at the front of the field, with Ladniak gradually losing time to Andersen, but not substantial enough to pose a threat to his advantage.

Behind, the Comtoyou Racing Audi RS 3 LMS of Jessica Bäckman was on a move from the back of the grid, following a crash in second practice and a subsequent technical problem during qualifying on Friday. Bäckman made it past Patrick Sing’s Hyundai, Roland Hertner’s Honda and then Tim Rölleke’s ROJA Motorsport Veloster.

Bäckman made further ground after a wild moment at the stadium section for Jahr, gifting his former team-mate sixth place heading into the closing stages.

Now released, Bäckman glued herself to the back of René Kircher for fifth and eventually made the move down the inside of turn two with just over six minutes remaining.

But Bäckman’s race ended suddenly as an apparent suspension failure coming through turn nine clean ripped the left-rear off the car sent the Audi into a spin on the exit of the corner.

That incident brought out the safety car with just under three minutes left to run, with the race ending under yellow flag conditions.

The drama didn’t stop there as Radermecker suddenly slowed on the final lap, with a mechanical issue, costing him a chance to finish third.

That meant Karklys salvaged a podium ahead of Kircher and Rölleke, with Jahr and Hertner behind.

Next up for TCR Germany is qualifying for Race 2, which is scheduled to take place later on today, at 18:00 CET.