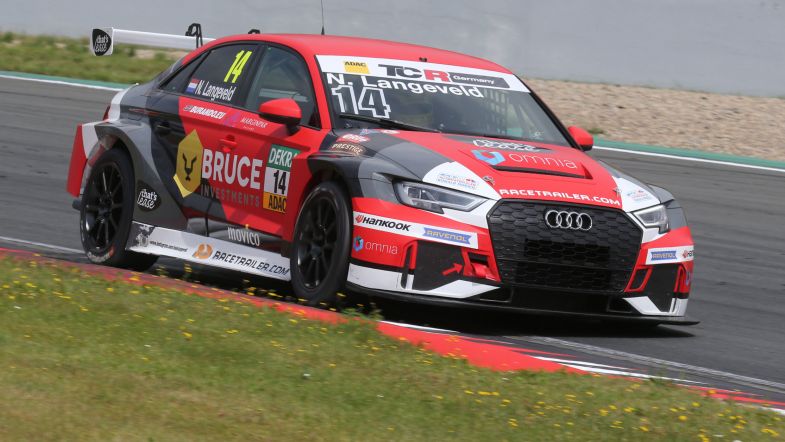 Racing One Audi driver Niels Langeveld has won the second race of the weekend at the Motorsport Arena Oschersleben, though the Dutchman is under investigation for two separate incidents which may seem him penalised by the stewards.

At the start of the race, Sheldon van der Linde’s Audi RS 3 failed to get away from fourth on the grid and was amazingly avoided by the 32 cars behind him, while pole-sitter Lukas Neidertschieder in the SEAT cut the first chicane and slammed into Tim Zimmermann’s Target Audi.

This handed the lead to the Engstler Volkswagen of Florian Thoma, with Honda ADAC driver Steve Kirsch second and the Racing One Audi of Niels Langeveld in third.

The safety car was first called on lap two, after Jürgen Schmarl’s Target Competition Honda was knocked into a spin at Turn 12.

The race was resumed on lap five, but was green for just one lap before the safety car was called again after the Lubner Opel of Jasmin Preisig was knocked into the gravel at the final corner by the GermanFLAVOURS Audi of Thomas Kramwinkel, for which the German driver would receive a drive-through penalty.

Just before the field reached the safety car boards, there was drama up front, as Honda’s Steve Kirsch was knocked into the gravel at Turn 11 from second by Langeveld’s Audi, with the incident flagged for investigation by the stewards.

When the race resumed, Thoma led the way into the first corner, but then lost control of his Golf GTI TCR at Turn 2, with apparent contact from Langeveld’s Audi, as the two cars were both marked for investigation later in the race.

Meanwhile, the Target Honda of Josh Files was making good progress from 14th on the grid and passed Luca Engstler’s Volkswagen for second, but didn’t have the pace to keep up with Langeveld’s Audi, who went on to win the race by four seconds, albeit under investigation for two incidents which will take place after the race.

Florian Thoma recovered to finish ninth after his spin, while Kris Richard in the #94 Honda Civic made his way from 36th and last to 13th after an engine change last night.