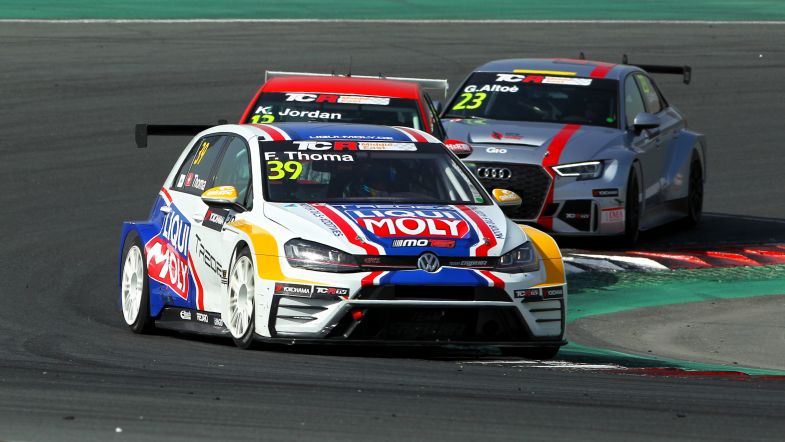 Swiss driver Florian Thoma won the second race of the day at the Dubai Autodrome, leaping from fifth to the lead in the reversed grid race in his Engstler Motorsport Volksagen Golf GTI TCR on the first lap, and going on to take a comfortable victory.

The Greek driver Costas Papatonis had started from pole for the second race in a row in the ex-Zele Racing, now Mouhitsa Racing Team-run SEAT León TCR, but dropped three spots at the start to fall behind Thoma, and the two Pit Lane Competizioni cars of Giovanni Altoè and Mat’o Homola.

As in the first race, Lorenzo Veglia, in a Pit Lane-run Volkswagen, made a great start and was up to seventh from 11th on lap one, and quickly began picking his way through the order, with Race 1 winner Luca Engstler right behind him.

On lap six, Veglia passed Papantonis’ SEAT for fourth, but the two made contact with the Greek driver retiring to the pits with the incident flagged for investigation.

Veglia’s progress contined as he passed team-mate Mat’o Homola on lap ten to move up to third.

On the last lap, GIovanni Altoè dropped from second and fell behind Veglia, Homola and Engstler, but Veglia was denied a podium spot as the officials quickly confirmed a 30-second time penalty for the Italian for his contact with Papantonis earlier in the race.

Thoma was classed as the winner, winning the race by 11 seconds from Homola in second, with Engstler classified in third. , GIovanni Altoè was fourth, while brother Giacomo recovered to sixth after dropping to last at the start, but loses ground in the championship.

Luca Engstler now leads the championship on 89 points, 14 clear of Altoè, with Homola 11 points further behind, heading to the final round of the TCR Middle East International Series on February 24th in Bahrain.