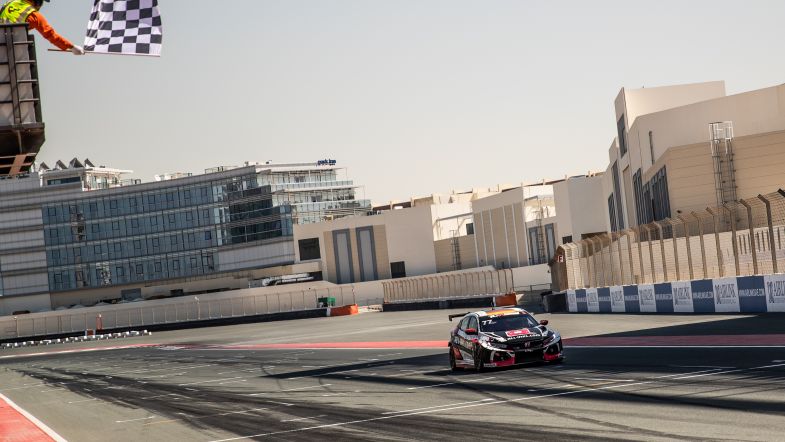 As expected, René Münnich has secured the 2019 TCR Middle East title after completing a clean-sweep of sprint wins during the season final in Dubai.

Against a field of just three additional cars, with the JW Bird Motorsport Volkwagen Golf that had raced in Abu Dhabi not present, Münnich qualified on pole position by more than two seconds at the wheel of his Honda Civic Type R TCR and won both sprint races with ease to end the campaign with a perfect record.

Münnich secured what was a series record-breaking fifth win with a routine drive lights-to-flag success in race one, ending up more than 20 seconds clear of the Red Camel-Jordans.nl Cupra TCR DSG of Luc Breukers, which had faced turbo issues during the early practice sessions.

It would prove to be a lonely race for the front two, with the only battle of note being the one between team-mates Zoltán Zengő and Tamás Tenke for third.

Zengő would ultimately prevail to take the final place on the podium, with Tenke retiring in the closing stages.

Although he started race two from the pits, Münnich wasted little time in hitting the front in race two and duly beat Breukers to victory by 16 seconds for a sixth straight victory – wrapping up the title in the process.

“It’s a wonderful feeling!” he said. “It’s great to win the title, we’ve had a lot of fun, and I’m a little disappointed it’s all over. But I really enjoyed this season, and hopefully we’ll be back next time.

“We’ve also found out a lot about the Honda during the races, and worked a lot on setup. That’s going be very helpful for this year’s WTCR. I’m very happy with our progress.”

Second for Breukers came despite an engine issue that forced him to ease off, although there was still no challenge from behind with the two Zengő Motorsport cars running into technical trouble and pitting before the finish.

As had been the case in the previous two endurance events, Münnich completed the running that was required to pick up the ten points on offer in the 4H Dubai – ensuring a maximum haul of points for the season.

With the Honda parked, it was Breukers who secured victory for the second weekend in a row alongside father Ivor and Yussif Bassil, coming home 13 laps clear of the first of the Zengő cars in the hands of Tamás Horváth and Gábor Kismarty-Lechner – which was hampered by fuel feed issues. The sister car completed the podium, seven laps further back, with Zengő partnering with Csaba Tóth.