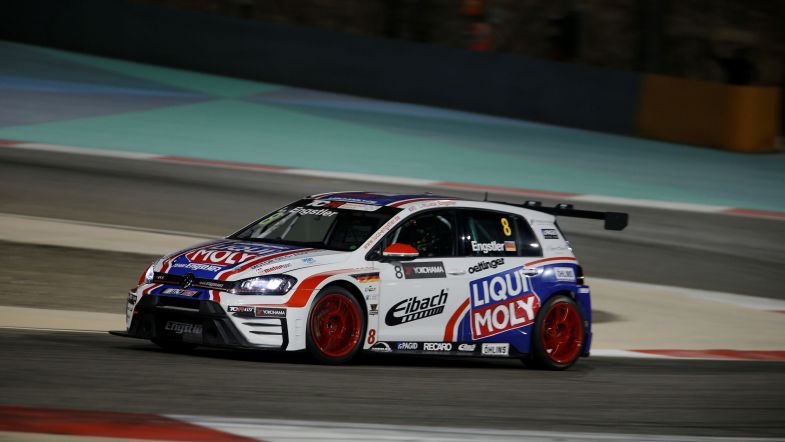 Luca Engstler has secured the 2018 TCR Middle East International Series drivers’ title after a dominant victory in the wet in the opening race in Bahrain, powering to victory in his Engstler Motorsport Volkswagen Golf GTI TCR.

The 17-year-old launched into the lead from pole, with his two Engstler team-mates Kai Jordan and Florian Thoma losing ground at the start, with the DSG-equipped Pit Lane Competizioni-run Golf of Lorenzo Veglia catapulting from fifth to second, with the Audi RS 3 LMS of Giacomo Altoè, Engstler’s only realistic title rival, moving up from fourth to third.

Engstler quickly beginning building a comfortable lead, while Veglia maintained a safe margin to Altoè during the early phase of the race, who needed to finish second to Engstler to stand any chance of taking the title fight to the last race.

Altoè’s chances further dimmed when he was passed for third by Thoma’s Volkswagen on lap nine, and was now fighting to keep back his Pit Lane Competizioni Audi team-mate Jordi Oriola.

Engstler set the lap record on lap 11, pushing his lead up to over ten seconds before half distance, while Veglia was now under attack for second from Thoma’s Engstler Motorsport Volkswagen.

Thoma overtook Veglia for second on lap 12, and quickly pulled away from Veglia, who dropped back towards Altoè’s Audi.

Altoè passed Veglia on lap 17, with Audi team-mate Oriola also making his way past with Veglia now down to fifth position, but the Italian was unable to do anything about Thoma, who was closing down on the race leader.

Engstler went on to win the race by six seconds and now leads the championship standings by 27 points, with just 25 available in the reversed-grid final race, which follows with local driver Raed Himmo starting from pole position at 21:00 AST (19:00 CET).