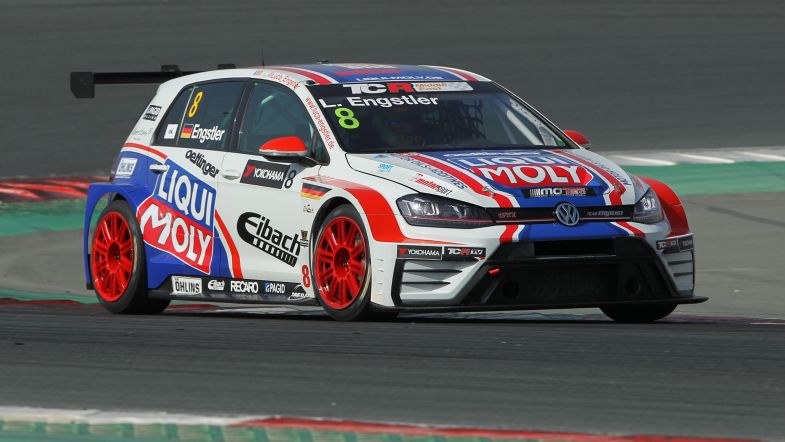 Luca Engstler has secured pole position for the season finale of the TCR Middle East International Series in Bahrain, leading an Engstler Motorsport 1-2-3 in qualifying, with Kai Jordan and Florian Thoma completing the top three.

Giacomo Altoè led the way in the early stages in his Pit Lane Competizioni Audi RS 3 LMS DSG, before the red flags were waved after six minutes when Bahraini driver Raed Himmo stopped on track in one of Pit Lane’s Volkswagen Golf GTI DSGs.

Engstler quickly jumped to the top of the time sheets when the session resumed with a time of 1:09.164, soon improving to a 1:09.056, the time which would give him pole position.

Altoè held onto second for a while, before improvements at the end from Jordan and Thoma demoted the Italian to fourth on the grid.

Lorenzo Veglia qualified in fifth position in his Pit Lane Competizioni Volkswagen, ahead of the Audi of team-mate Jordi Oriola.

The full field will therefore be reversed for the second race, with Himmo starting from pole position.

Engstler’s championship lead is now 17 points over Altoè, with Mat’o Homola third but out of contention for the title simply due to his absence from the final round.

Engstler’s team-mates Kai Jordan and Florian Thoma are also mathematically in contention, although they’re both 42 points back with 50 points available from the two races tomorrow.