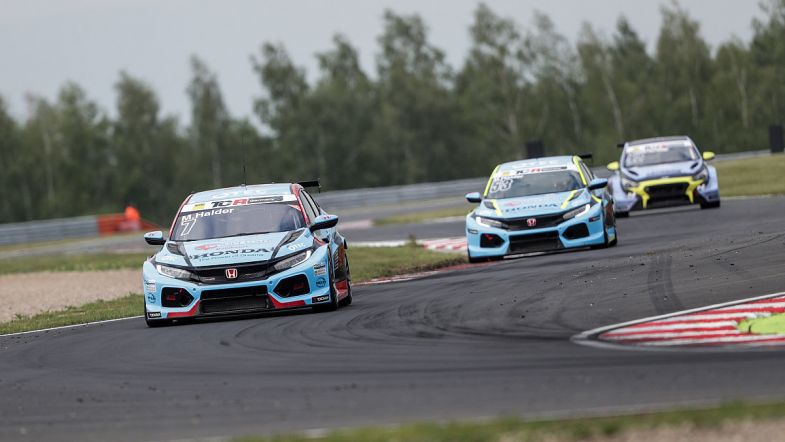 Mike Halder takes his second win of the year at Most

Team Honda ADAC Sachsen’s Mike Halder, at the wheel of a Honda Civic FK8 TCR, took his second victory of the TCR Europe season in race one at Most, beating Team Engstler’s Max Hesse and HP Racing International’s Harald Proczyk to top honours.

Halder and Hesse, at the wheel of a Hyundai i30 N TCR, beat pole-sitter Proczyk, driving another Hyundai, at the start, with Team Halder’s Marcel Fugel and Lukas Niedertscheider colliding at turn one.

Jessica Bäckman also spun her Team Engstler Hyundai i30 N TCR out of the race at the first corner with broken front right suspension, causing the safety car to come into action. Steve Kirsch also spun off the track with his Opel Astra TCR, but was able to rejoin.

At the restart, Dominik Fugel – at the wheel of a Honda Civic Type R TCR – overtook Proczyk for third place.

Marcel Fugel continued his incident-packed race, launching himself from a long distance back up the inside of TOPCAR Sport’s Julien Apotheloz’ Cupra TCR at turn one on lap ten. The pair collided, with Apotheloz retiring to the pits and Fugel getting a drive-through penalty for the incident. He would also eventually retire.

Further back, Michelle Halder, at the wheel of a Honda Civic Type R TCR from Team Halder overtook Racing One’s Rene Kircher, a the wheel of an Audi RS 3 LMS, for ninth place on lap 15.

The last few laps were livened up by the fight between Proczyk, Dominik Fugel and LMS Racing’s Antii Buri, driving his Audi RS 3 LMS, with Fugel going wide and losing third place to Proczyk two corners from the end of the race.

At the chequered flag, Mike Halder took his second win of the season, followed by Hesse and Proczyk on the podium.

Dominik Fugel was fourth, followed by Buri with Team Engstler’s Theo Coicaud, at the wheel of a Hyundai i30 N TCR, in sixth.

Niedertscheider managed to take his Hyundai to the finish line in seventh position, with Michell Cheah, in the Volkswagen Golf GTI TCR from VW Team Oettinger in eighth place.

Michelle Halder was ninth, with Kirsch recovering through the field to complete the top ten.

Mike Halder now leads the standings with 123 points with Hesse 12 points behind and Proczyk 26 points adrift.