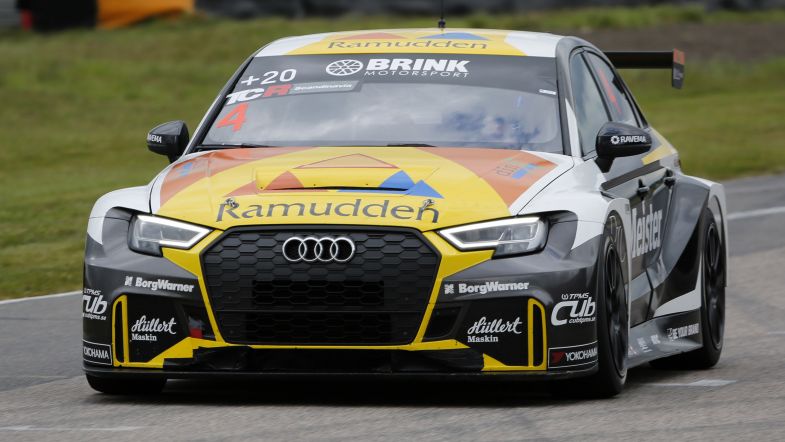 Andreas Wernersson has defied Robert Dahlgren pole position at home, with the Brink Motorsport Audi driver set the best time in the dying moments of qualifying at at Fällfors, outqualifying Dahlgren by three-tenths of a second.

With Mattias Andersson missing qualifying with his team on the way back to his Linköping base to collect a spare engine so he can take part tomorrow, Q1 was all about eliminating one car.

Mikaela Åhlin-Kottulinsky, in the PWR Racing Cupra, abandoned her first run and was sitting in a precarious seventh, but went third fastest on her first full flying lap, knocking the sister Cupra of Peter ‘Poker’ Wallenberg out of the top six and out of qualifying.

Robert Dahlgren comfortably topped Q1 in his PWR Racing Cupra, over half a second clear of Andreas Wernersson’s Brink Motorsport Audi, and led the top six who made their way into Q2.

Wernersson put in a strong opening lap of 1:53.888, going faster than Dahlgren in the second sector, but the Cupra driver pulled it back in sector three to just nudge ahead of his title rival by 0.079 seconds with a time of 1:53.809.

As in Q1, PWR Racing driver Mikaela Åhlin-Kottulinsky aborted her first lap, while an error by Tobias Brink saw the Audi driver two seconds off after his first run.

The team ran out of time to get Brink out for another shot, while Åhlin-Kottulinsky went out and had one more run, but was unable to improve, placing her Cupra TCR sixth on the grid.

However, Wernersson was on track for a final flyer, with Dahlgren remaining in the pits – and the last-minute move paid off for Wernersson, with the Audi driver snatching pole position from Dahlgren, while will the top four reversed grid will have Wernersson’s team-mate Hannes Morin start from pole position for Race 2 tomorrow, his second reversed grid pole of the year.