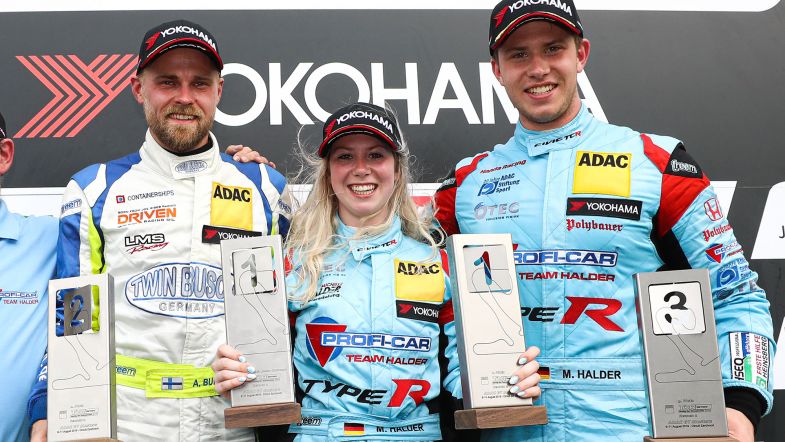 Michelle Halder: “Awesome to be on the podium with my brother”

Michelle Halder scored her maiden TCR Germany championship victory in the final race of the Zandvoort weekend and shared the podium with her brother Mike Halder.

“It’s really awesome to be on the podium together with my brother,” said Michelle Halder.

The Team Halder driver started from the reversed grid pole position and kept the lead from lights to flag after a strong start.

“I got off to a great start and got a small gap that I was able to hold on to during the race,” said Michelle Halder.

Second was championship leader Antti Buri who was unable to catch the Honda driver and instead had to defend from Mike Halder. The Finn was however able to strengthen his championship lead to 12 points over Hyundai driver Harald Proczyk.

“I could not catch up to Michelle and Mike came very close and extremely fast at the end, unfortunately we did not have the pace to keep up with the Hondas this weekend. But I am still happy and I look forward to the Nürburgring,” said Buri.

“I am very happy for Michelle, it’s great that she turned her pole into victory, a perfect job, that’s all you can say. I had a very good race as well. The first laps were very hard and I would like to have climbed a bit further. But the points are important and the championship is very, very close,” said Mike Halder.

The next TCR Germany championship race takes place at the Nürburgring next weekend on August 17-18th.