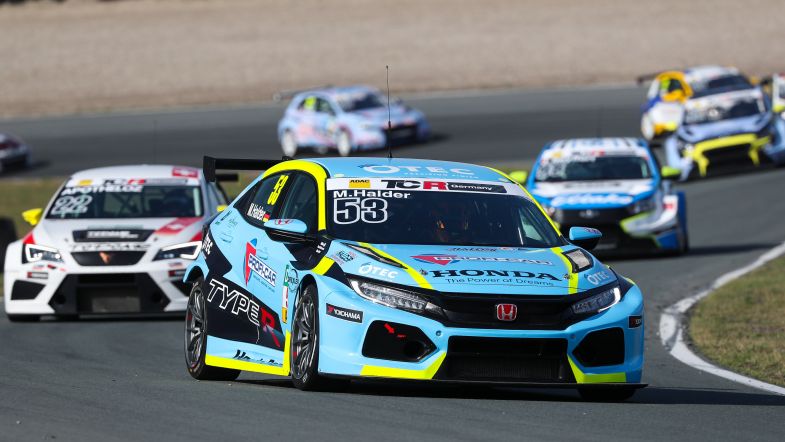 Michelle Halder claimed a lights-to-flag victory in the final TCR Germany championship race of the weekend at Zandvoort, with brother Mike Halder rounding off the podium in third behind championship leader Antti Buri.

Michelle Halder, driving for Team Halder, started from the reversed grid pole position and made a strong start to claim a lead she never lost, crossing the line just over one second ahead of LMS Racing driver Buri.

Buri made a strong start in his Audi RS 3 LMS from fifth on the grid to claim third into the first corner. The Finnish driver kept his foot down on the opening lap, making his way past fellow Audi driver René Kircher into second place.

The second lap saw Honda driver Mike Halder being overtaken by reigning champion Harald Proczyk with a brave move on the outside coming into the first corner, claiming fifth position.

But Mike Halder reclaimed the position a lap later, with Dominik Fugel following past Proczyk in the same move. Fugel later retired due to a technical issue with his Honda.

Fugel Sport driver Mike Halder managed to pass Kircher a corner later for fourth postiion. And things turned from bad to worse for Racing One driver Kircher who continued to drop down the order, finishing in eleventh position.

Meanwhile, Mike Halder continued his way up through the field to pass Hyundai guest driver Lance David Arnold for third position with eleven minutes left of the race.

As the race neared its end, the battle for fifth position heated up between Hyundai rivals Max Hesse and Proczyk, with the latter making a late move into the “Audi S”. The move resulted in heavy contact and a broken rear suspension for Hesse.

Proczyk crossed the line in fifth position while Hesse fought wildly with a crabbing car during the final two laps, dropping down to finish ninth. The stewards announced the incident was under investigation.

Buri’s second place in the race has strengthened his championship lead to 12 points over Proczyk and 24 points over Mike Halder.

The next TCR Germany championship race takes place at the Nürburgring next weekend on August 17-18th.