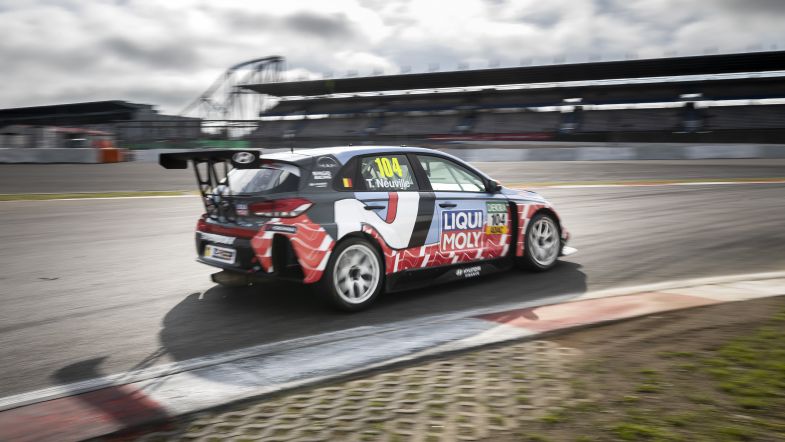 Having topped Friday practice, World Rally Championship regular Neuville was on scintillating form once again throughout qualifying, leading the opening Q1 segment by nearly half a second from fellow Hyundai Team Engstler colleague Max Hesse thanks to a superb 1:33.815 lap.

Easily fulfilling his humble pre-qualifying target of making the top 12 cut to Q2, Neuville then set an even faster pace in the decisive segment, shaving another hundredth of a second off his Q1 time on his first attempt in Q2 to produce a 1:33.808.

That lap established the Belgian rally star, who is ineligible for points this weekend courtesy of his guest driver status, roughly a tenth ahead of the improved Hesse.

Neuville then took to the track for a final run in the closing stages, but was unable to improve.
Hesse, however, did find room for enhancement as the clock ticked down to zero, coming agonisingly close to bettering Neuville’s benchmark but ultimately falling 0.037s short.

Neuville and Hesse will thus share the front row of the grid in Race 1 later today, with the aforementioned Halder taking third in his Honda Civic TCR to split a sea of Hyundais that otherwise occupied the top six.

Theo Coicaud was fourth ahead of reigning champion Harald Proczyk, while Lukas Niedertscheider underpinned the dominant form of the i30 N TCR fleet in sixth.

Championship leader Antti Buri could only manage seventh in the field’s top Audi, some six tenths down on Neuville, with Dominik Fugel following in eighth for Fugel Sport.

Mitchell Cheah (Volkswagen) and Pascal Eberle (Cupra) completed the top ten, meaning they will share the front row of the reversed-grid Race 2 on Sunday with Eberle on pole.