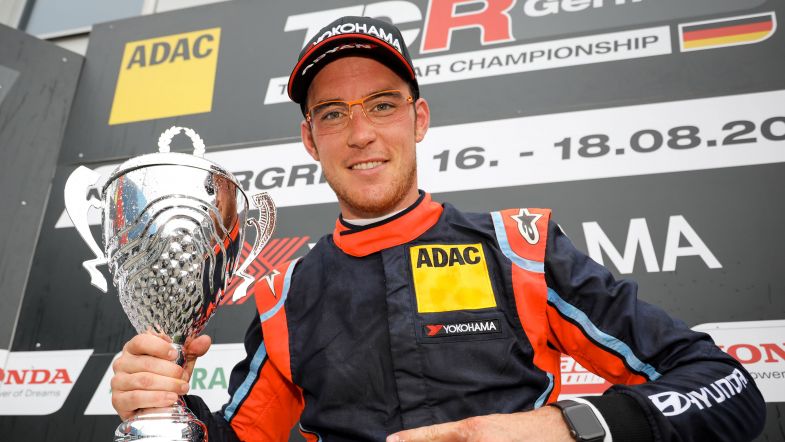 Thierry Neuville: ”I just drove as fast as I could”

TCR Germany championship newcomer Thierry Neuville says the fact he was lacking any previous references allowed him to “just drive as fast as I could” on his way to an impressive lights-to-flag victory in the first race of the Nürburgring weekend.

Neuville converted pole position into a triumphant 4.2-second win on what marked an astonishing TCR debut, the World Rally Championship star leading from start to finish and setting the fastest lap in the process as he makes a guest appearance in employer Hyundai’s Team Engstler-run VIP car.

“It was a pretty good race,” Neuville said to TouringCarTimes. “I obviously got a good start without having tested it before, but it worked well and from there on I had a good feeling with the car. The balance was really great. I had a good set-up which made me really confident to push. I just tried to drive as fast as I could from the beginning to the end, not knowing what to expect. The lap times were consistent and the speed was good.”

When asked by TouringCarTimes to expand on how he was able to make such a good start – believed to have been one of the fastest of the entire field according to team insiders – Neuville said the procedure was actually not too complex.

“Actually, you have to do nothing! You just have to go full throttle and at one point you release the launch button. When I felt good traction I put second gear and I went away. Maybe it’s much more difficult when it’s wet or less grip, but in the dry it’s pretty straightforward.”

With Neuville ineligible for points due to his guest driver status, Hesse took the maximum score of 40 available to reduce the gap to championship leader Antti Buri (who finished fourth) on a good day for Hyundai.

“The last five laps I started to complain [about tyre degradation], but at the end I actually was able to make a small gap,” said Neuville. “Maybe Max was releasing also because he knew I wouldn’t take any points and he was in a good position for the championship.”

To complicate things further for the debutant, the race featured a safety car phase that bunched up the pack after Bradley Burns’ Honda caught fire and stopped on track. Neuville, however, was unfazed, revealing that he had received some pre-race advice on the topic from World Touring Car Cup champion Gabriele Tarquini who is on site to help out this weekend.

“[That was] something completely new also,” Neuville said, “but Gabriele gave me some good tips before. I tried to keep a good gap at the beginning from the safety car, I picked up the speed, I reduced the speed a few times, created a little bit of mess behind and had a good start. I didn’t really pull away but I got some gap straight away, five tenths when we crossed the start line, so it was good.”

As a result of topping the times in qualifying, Neuville will start Sunday’s final race from tenth on the partially reversed-grid, where Steibel Motorsport’s Pascal Eberle sets off from pole.

“Tomorrow is a different story with a midfield start,” Neuville said. “We have seen some people crashed already in the first corner [today], and maybe it will be wet… Then it will be really tricky for me. I’ve not been so quick in the wet the few laps I’ve done. Hopefully I can get out of any trouble and have a nice race again.”