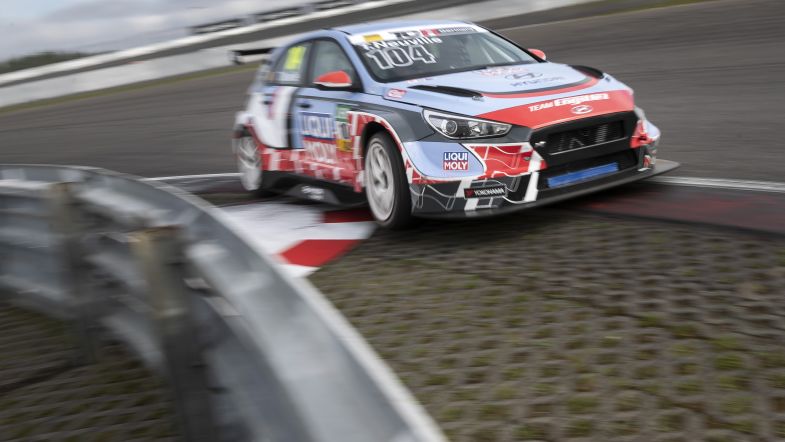 Thierry Neuville completed an emphatic Grand Chelem on his maiden outing in the TCR Germany championship, leading from start to finish and setting the fastest lap of the race in Saturday’s opening Nürburgring encounter.

Guest driver Neuville was untroubled at the front aboard his Hyundai Team Engstler i30 N TCR, the rallying regular belying his circuit racing inexperience to overcome a safety car restart on his way to victory from pole.

With Neuville ineligible for points due to his guest driver status, however, it was championship contender Hesse who claimed the highest score, the German now up to second in the standings just 24 points down on leader Antti Buri who finished fourth.

While relatively undramatic at the front, the race featured more drama behind.

There was chaos at the start when several cars made contact at the sharp Turn 1 hairpin, with title hopeful Mike Halder arguably the most notable victim after getting spun around by Harald Proczyk.

Proczyk was able to continue in third place, but plummeted down the order as the race progressed after sustaining damage to the front of his Hyundai in the Halder incident. Proczyk eventually slipped to 11th.

Elsewhere on lap one, Theo Coicaud was caught up in a separate incident just behind, dropping the Frenchman – who had started fourth – well down the order. Coicaud recovered to finish a strong sixth.

Just as the race started to settle in, it came to an ironic twist on lap four when Bradley Burns’ Pyro Motorsport Honda burst into flames at the Advan-Bogen kink on the back stretch.

Burns swiftly parked up at the following Veedol chicane, triggering a safety car period that erased leader Neuville’s advantage at the front.

The Belgian had no trouble maintaining his lead at the restart, however, and gradually increased the gap to Hesse across the final few laps.

It was a torrid series – and car racing – debut for Karen Gaillard. The 18-year-old, promoted to a drive this weekend via the Cupra Young Driver Challenge, spun in the Mercedes Arena on the opening lap before picking up two drive-through penalties (one for a jump start and one for speeding in the pit lane as she served her first penalty). She was ultimately lapped by race winner Neuville on the final tour.

Gaillard was one of a full six drivers to pick up drive-through penalties for a jump start. The others were Lubner Motorsport duo Jörg Schori (Opel) and Jan Seyffert (Lada), Steibel Motorsport’s Sebastian Steibel (Volkswagen), and the Halder siblings Mike and Michelle (both Honda).