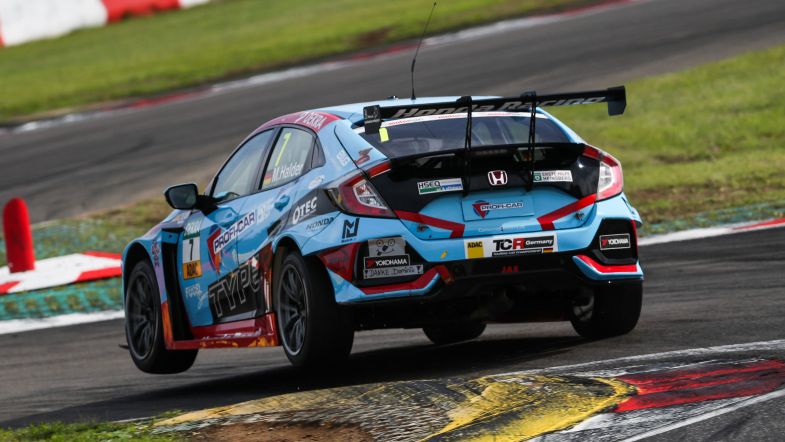 Mike Halder: ”The most fun race of my life”

Fugel Sport Honda driver Mike Halder has labelled Sunday’s TCR Germany championship encounter at the Nürburgring “the most fun race of my life” and believes the rain-halted affair should have been restarted.

The series’ second and final race in the Eifel mountains was heavily affected by the weather, with a sudden torrential downpour causing several incidents and ultimately triggering the red flags to be waved.

All drivers had started the race on slicks but gradually made their way into the pits for a change of tyres as the rain increased during the event.

“I had a lot of fun, it was unbelievable,” Halder said to TouringCarTimes. “It was the best, most fun race of my life, driving with the slick tyres in the rain. It was a question of when we should pit, but it was raining sometimes a lot and in some places less. I continued for two or three laps but then the big rain was coming and I was aquaplaning completely! That’s when we pitted. It was a perfect race, much fun.”

The race was not resumed following the red flag, a decision Halder – who sits fourth in the drivers’ championship – questioned.

“I’m a guy who likes to drive in all conditions,” Halder continued. “I don’t know why race control stopped the race or didn’t start it again. I think we need to drive and give the sponsors and fans a good story to watch. OK, there was maybe two or three minutes when there was very much water on the track, but after that the rain slowed down and I think we could have restarted it.”

Halder also praised his Fugel Sport team, who serviced the Honda swiftly in the pitlane during the change to rain tyres.

“In the end I think it doesn’t matter what kind of position we are in today, the guys still did a great job. Very good work from the mechanics. I overtook [Antti] Buri in the pits so that was a perfect job from them. I was very happy to drive this race, it was fun.”