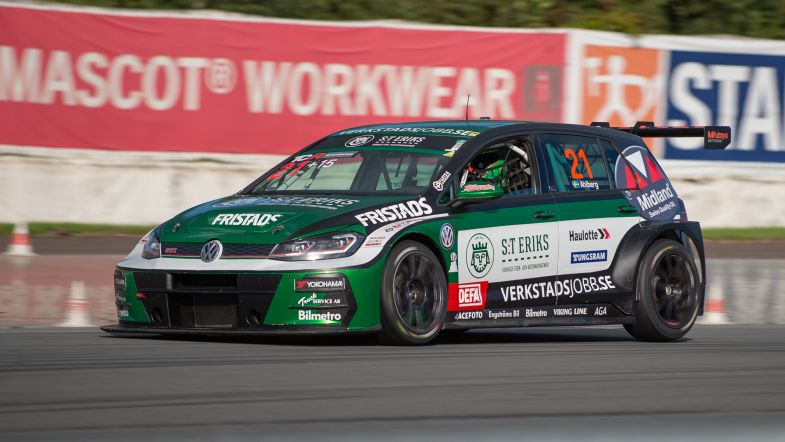 Andreas Ahlberg has claimed his second win of the 2019 TCR Scandinavia Touring Car Championship at Jyllandsringen, and will be one of four drivers who goes to the season finale with a chance of winning the title, with title contenders Tobias Brink and Robert Dahlgren completing the podium.

Ahlberg got a perfect launch from second on the grid in his Kågered Racing Volkswagen Golf GTI TCR, and was leading into Turn 1, as Hannes Morin fell in behind his two Brink Motorsport Audi team-mates Tobias Brink and Andreas Wernersson.

Into Turn 1, Kim Lund in his Madbull Racing Cupra TCR DSG made a lunge on Mikaela Åhlin-Kottulinsky’s Cupra, but hit a puddle on the inside and speared across her nose and into Martin Jensen’s Insight Racing Alfa Romeo Giulietta TCR, with both cars out of the race on the spot.

The safety car was out for four laps as Lund and Jensen’s cars were recovered.

At the restart, the field held station, but after one lap, Wernersson slowed out of second with a problem with the front-right, with his Audi RS 3 LMS crabbing.

The championship contender let past team-mate Morin, and tried to hold off the chasing pack, but slowly fell back behind Casper Elgaard’s Honda, Dahlgren, Mattias Andersson’s Honda and the Cupra of Åhlin-Kottulinsky.

Dahlgren mounted a charge on Elgaard’s Honda, and overtook the Dane on lap ten and was up into fourth. The championship leader then caught Morin’s Audi, and the two were engaged in an almighty tussle over the last few laps.

A mistake from Dahlgren on the penultimate lap saw Elgaard back in the mix, and the Massive Motorsport Honda driver swept past Dahlgren into fourth and was trying to go down the inside of Morin’s car into Turn 1 to take third, before he hit the same puddle Lund did on lap one and crashed into Morin’s car, with both cars out.

Ahlberg won the race by eight-tenths of a second from Brink, with Dahlgren third.

Andersson finished fourth in his Honda, with Åhlin-Kottulinsky fifth, and Wernesson picked up key points for his drivers’ and the Brink Motorsport squad’s teams’ hopes with sixth.

Dahlgren leads the drivers’ standings on 221 points, 21 clear of Brink, with Ahlberg ten further behind, and Wernersson seven further back heading to the last round, while Brink Motorsport lead the teams’ standings by 20 points over PWR Racing.

The final round of the championship takes place at Mantorp Park on October 4th-5th.