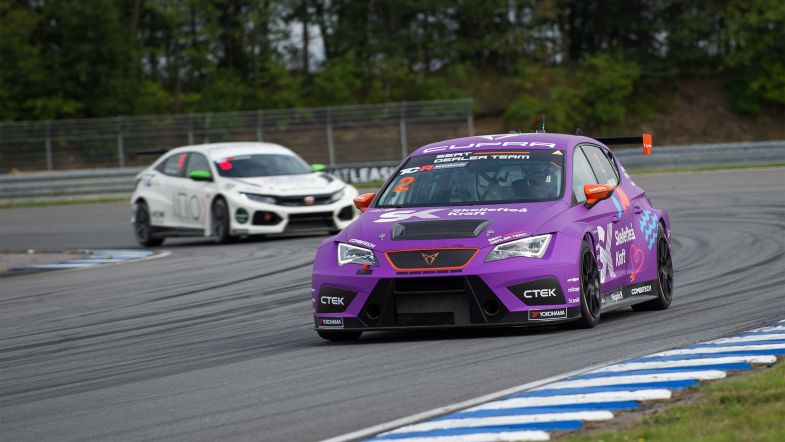 PWR Racing’s Robert Dahlgren has extended his championship lead to 21 points over his closest rival, after a victory and a third place at the Jyllandsringen circuit in Denmark.

Racing in Denmark for the first time since 2010, Dahlgren secured pole position by almost half a second over local driver Casper Elgaard, and led the way into Turn 1, building up an eight second lead over the Audi of Tobias Brink, his closest championship rival.

In Race 2, Dahlgren battled forwards from sixth, passing Elgaard’s Honda, and then fought with Hannes Morin in one of the Brink Motorsport Audis, until Elgaard catapulted into Morin’s car with a mistake at Turn 1 on a wet patch, handing Dahlgren the podium.

“It was almost a perfect weekend,” said Dahlgren to TouringCarTimes.

“With the speed we had, I think we almost could have had a perfect weekend here – I had a mega car in both races, and in Race 2 I felt like I could have driven around Hannes (Morin), but he moved under brakes and I wasn’t sure what he would do, and for me it wasn’t worth a third place or a DNF, so I was just hoping he’d make a big enough mistake so I could slip past.

“And then he made a mistake, and Casper (Elgaard) came, and that was that.”

Dahlgren heads to Jyllandsringen with a relatively comfortable 21-point margin, with 55 points to play for at Mantorp Park next month, but Brink, Kågered Racing’s Andreas Ahlberg and Brink’s team-mate Andreas Wernersson are all within mathematical contention for the title.

“We’re in the game for the drivers’ and teams’ championships – Mantorp Park will be interesting. I feel like I’m driving very well and feel very good in the car, and we have a mega car – I’m just happy when I drive it – I just want to keep racing it.”