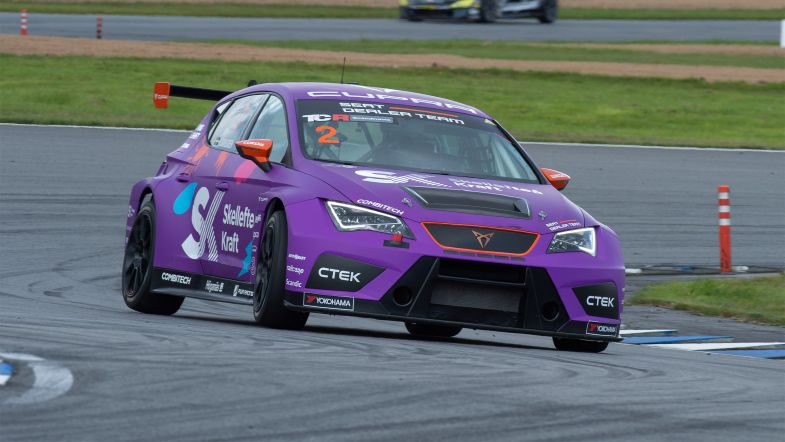 Robert Dahlgren has won the first race of the weekend at Jyllandsringen, extending his points lead over the Brink Motorsport Audi of Tobias Brink who finished second, after Casper Elgaard was forced to serve a drive-through penalty for a jump start in the race and dropped to fifth.

Dahlgren led the way into Turn 1 in his PWR Racing Cupra TCR after a quick change of the lights, while Elgaard held on to second in his Massive Motorsport Honda Civic FK8 TCR, ahead of the two Audis of Brink and Andreas Wernersson.

Behind, Mattias Andersson had made one of his typically strong starts in his MA:GP Honda Civic FK2 TCR and had moved past the PWR Racing Cupra of Mikaela Åhlin-Kottulinsky into seventh, but struggling for pace he was soon passed back a lap later.

On lap three, Elgaard dropped down to sixth position in his Honda Civic after serving a penalty for a jump start, rejoining just ahead of Åhlin-Kottulinsky’s Cupra.

The two gained a position as Hannes Morin was also made to serve a penalty at the end of lap seven and also fell back at the end of the lap, but the young driver mounted a charge in the final laps, forcing Åhlin-Kottulinsky to defend hard and allowing Elgaard breathing space.

Up front, Dahlgren continued to pull away and won the race by over eight seconds ahead of Brink, with Wernersson third.

Dahlgren’s victory moves him 24 points clear of Brink in the drivers’ standings, while the Brink Motorsport team maintain a 19-point lead over PWR Racing in the teams’ standings.

The second race of the day gets underway at 15:45 CEST, with Brink Audi driver Hannes Morin starting on pole position.