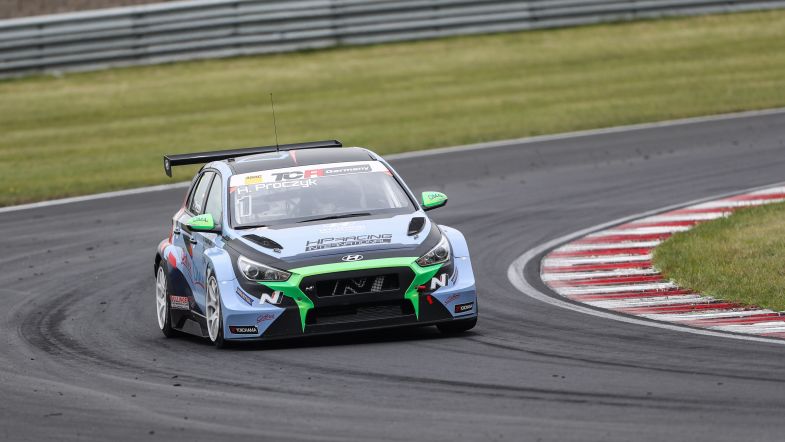 The HP Racing International driver made a strong getaway from pole position to lead into the first corner as fellow front-row starter Andreas Bäckman got swallowed up by Mike Halder’s Honda Civic Type R FK8 and the Hyundai i30 N TCR of Max Hesse.

Theo Coicaud was also a fast-starter in his Engstler Hyundai and made his way into third past Bäckman, before mounting an attack on Halder after Hesse was pushed wide exiting the Mercedes Arena.

Coicaud then forced his way ahead of Halder at the penultimate corner for second place, with contact sending Halder onto the run-off section and dropping the Honda to fifth.

Championship leader Antti Buri had a torrid time in the opening stages after starting only tenth in his LMS Racing Audi RS 3 LMS. The Finn had moved ahead of the Hyundai i30 N TCR of Lukas Niedertscheider for seventh, but ceded the position after initial contact.

Marcel Fugel then brought out the first of two safety cars as he dumped his Fugel Motorsport Honda Civic Type R FK2 TCR into the gravel at the final corner.

This bunched the field up and negated what had been a two-second lead for Proczyk.

Proczyk built up a slender lead of just over seven-tenths of a second at the restart and continued to lead until the flag.

Behind, a three-way battle for sixth raged on between Bäckman, Buri and Niedertscheider, which culminated in Bäckman outbraking himself into Turn 4 – dropping three places – and subsequent contact between Niedertscheider and Buri.

Niedertscheider was side-by-side with the Steibel Motorsport Cupra of Pascal Eberle, with the former missing his braking point entering the Mercedes Arena, hitting the rear left of Buri’s Audi.

The stricken Hyundai of Niedertscheider was beached in the gravel and brought out the safety car once more.

With barely three minutes left, the race finished under yellow, with Proczyk taking the win from Hesse, who forced his way past Coicaud at the restart, by a meaningless four-tenths of a second.

Halder finished ahead of Dominik Fugel for fourth, with Eberle heading the second Target Competition Hyundai i30 N TCR for fifth.

The second race of the weekend at Hockenheim is scheduled to take place on Sunday afternoon at 14:40 CEST.