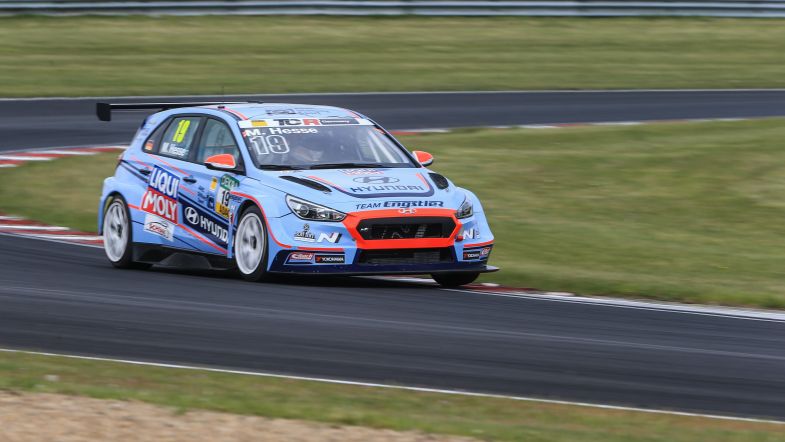 Hyundai Team Englster’s Max Hesse has moved into the TCR Germany championship points lead after claiming his third win of the season in the second race at Hockenheim.

Hesse worked his way up from sixth on the grid to take the lead on the sixth lap of 18 and is now 14 points clear of Harald Proczyk (HP Racing International).

Michelle Halder lined up on pole position following a post-qualifying penalty for Bradley Burns (Team Pyro), with Dominik Fugel alongside on the front-row.

Burns was a non-starter as Halder made a decent getaway to lead into the first corner.

Fugel quickly latched onto the back of the Fugel Sport Honda Civic Type R FK8 TCR and dived down the inside to take the lead at the hairpin.

Halder fought back and re-took the lead as the pair entered the Mercedes Arena, but Fugel cemented his place at the top exiting the corner, with Halder slipping behind the Target Competition Hyundai i30 N TCR of Jessica Bäckman, Hesse, Mike Halder and Proczyk after running wide.

Andreas Bäckman received an early drive-through penalty after running into the back of Pascal Eberle’s Steibel Motorsport Cupra TCR at the hairpin.

Steibel then hit the back of Theo Coicaud’s Engstler-run Hyundai i30 N TCR, with both retiring on the spot.

Hesse had worked his way up to second ahead of Jessica Bäckman and seized the lead of the race on lap six at the Mercedes Arena after getting a good run on Fugel out of the hairpin.

Fugel tried to fight back towards the end of the lap but went wide at the Sachs Curve, which allowed Hyundai driver Jessica Bäckman through into second on the exit.

Proczyk, sensing an opportunity, closed to the back of Fugel’s Honda before long and forced his way onto the podium coming through Turn 5 with just over 10 minutes remaining.

Hesse opened up a gap of over a second from Bäckman, with the latter closing to within nine-tenths by the flag.

Proczyk managed to limit the damage with third place, ahead of Fugel who just fended off the attentions of Mike and Michelle Halder behind. Rene Kircher was next, ahead of Marcel Fugel and the first of the Volkswagen Golf GTI TCRs of Mitchel Cheah.

He beat fellow Volkswagen driver Sebatian Steibel, who rounded out the top ten.

Antti Buri, who headed the standings heading into the weekend, suffered another disappointing race and could only manage 12th place.

The Finn now lies third in the standings, 21 points behind Hesse and seven adrift of Proczyk as the series heads into final round of the year at the Sachsenring on September 27-29th.