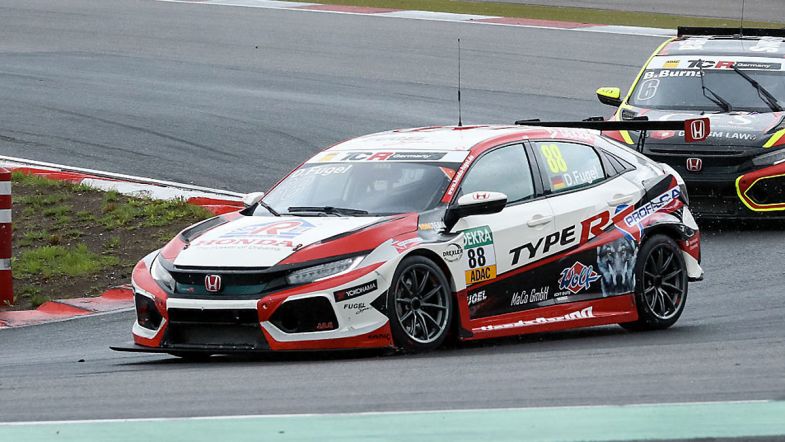 Fugel made his pole position count to take the lead at the start in his Honda Civic Type-R FK8 TCR, followed by Buri who overtook Fugel’s team-mate Mike Halder on the first lap.

Title rivals Harald Proczyk and Max Hesse, both driving Hyundai i30 N TCRs from HP Racing International and Team Engstler respectively, followed at a distance, although with Hesse closing the gap to Proczyk.

Mitchell Cheah of VW Team Oettinger went wide at Turn 8 on lap seven, spinning and hitting the barriers, with the car stranded in the gravel trap. This caused a safety car intervention for two laps.

Fugel maintained the lead at the restart, with Hesse attacking Proczyk. The reigning champion lost ground to third-placed Halder as he defended from the Team Engstler driver. But Hesse soon fell behind, coming under pressure from team-mate Theo Coicaud, also driving a Hyundai i30 N TCR.

Team Halder’s Marcel Fugel and Steibel Motorsport’s Sebastian Steibel came together on lap 13, with Steibel overtaking Fugel for eleventh place. Comtoyou Racing’s Sami Toufik, who lost his impressive fifth grid position after going off in the first corner at the start, also managed to overtake Fugel.

Taoufik overtook Steibel for tenth position on lap 16, with Fugel also following through.

At the front Mike Halder lost ground to the leaders after encountering problems to lap Sophie Hoffmann’s damaged Cupra TCR. This enabled Buri to close the gap to attack Fugel in the closing stages of the race.

Hesse, who headed the points table heading into the weekend, struggled in the final two laps of the race, losing several positions. Team Halder’s Michelle Halder, Pascal Eberle of Steibel Motorsport II, TOPCAR Sport’s Julien Apotheloz and his team-mate Coicaud managed to get past.

Fugel managed to stay ahead in the closing stages of the race to beat Buri by half a second, with Mike Halder completing the podium.

Proczyk was fourth at the line, followed by Michelle Halder, Eberle, Apotheloz and Hesse, while Coicaud and Taoufik completed the top ten.

Hesse still heads the championship on 398 points, four points ahead of Prozczyk and with Buri just a further point behind. Halder is fourth, 28 points behind Hesse and still in the title fight.