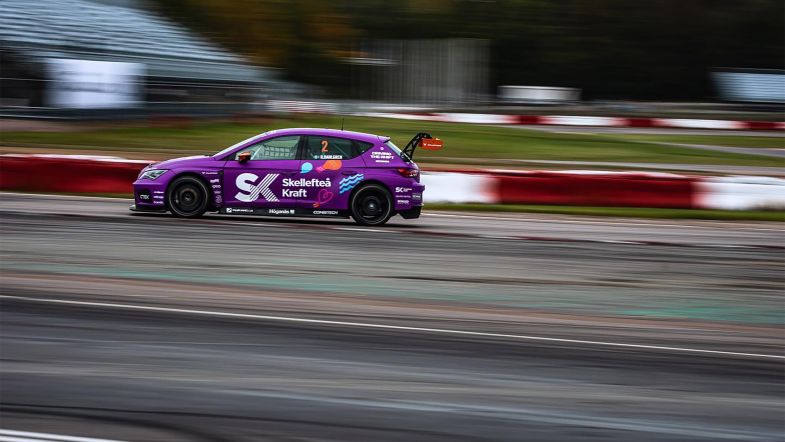 Robert Dahlgren has taken the 2019 TCR Scandinavia championship drivers’ title after finishing fourth in the final race of the season at Mantorp Park, while Andreas Wernersson took his fourth victory of the season, sealing the teams’ title for Brink Motorsport.

Wernersson started the race from pole position and led the way ahead of PWR Racing’s Mikaela Åhlin-Kottulinsky, while Daniel Haglöf was passed off the line by the fast-starting Honda of Mattias Andersson.

Andersson overtook Åhlin-Kottulinsky for second before the end of the first lap at F2, while Haglöf handed fourth to his team-mate and championship leader Dahlgren.

Haglöf then held up Brink in sixth, which allowed the chasing pack to get involved, but with the cars behind struggling for pace, the two drivers soon began to pull away again.

Hannes Morin was trying to fight his way up the order after a slow start, repassing the Kågered Volkswagen of Tomas Engström and was then fighting Ahlberg’s Golf for seventh in the early stages.

Brink was trying to find a way past Haglöf, and then unsighted, the Audi driver was in the barriers at Turn 7, with Haglöf marked down for investigation.

Up front, Wernersson controlled the race, and although Andersson closed in during the final laps, remained in control and claimed the victory.

The final standings means Dahlgren wins the title by 29 points ahead of Brink, with Wernersson just five points behind.

Brink Motorsport have won the teams’ title by the same margin, taking the title away from defending champions PWR Racing.

The 2020 STCC TCR Scandinavia season is due to kick off next May at Knutstorp.