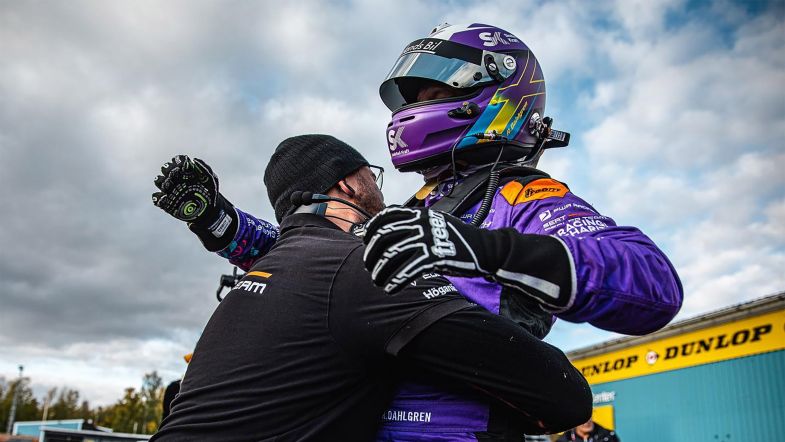 Robert Dahlgren: “We had to bring our A-game every weekend”

Robert Dahlgren is jubilant after winning his second Scandinavian touring car title in three years, with the PWR Racing driver doing what he needed to do with a third and fourth place finish at Mantorp Park enough to win the battle.

The 39-year-old qualified in second place on the grid in his Cupra TCR, but couldn’t keep pace with the front runners Tobias Brink and Mattias Andersson’s Audi and Honda in Race 1, with Dahlgren carrying the full 60kg of compensation weight, and maximum 20kg of success ballast, putting him 80kg up, worth the best part of a second a lap around the track.

“I just did what I’ve done all year, and try and take points, and if I had the car that could win, I’d have gone for the win,” said Dahlgren.

“We didn’t have the car today for it due to the compensation weight, which is boring to talk about, but around this particular track it hurts quite a bit.”

Brink finished second ahead of Dahlgren on the road, cutting the points gap to 17 points, but when the Audi driver didn’t finish in the second race after an incident with Dahlgren’s team-mate Daniel Haglöf, it was at that point he won the title.

“I heard I won the title on the radio before I saw the car that Brink was out, and that was the first time this year I’ve lost focus. I dropped about 3-4 seconds, I forgot to put the throttle down,” he said.

“It’s been a close year. It’s been really quick up at the front all year, and we’ve had to bring our A-game every weekend. I’m so happy for the entire team, as we’ve worked really hard, even when we’ve been quick, we’ve worked to try and go quicker.”