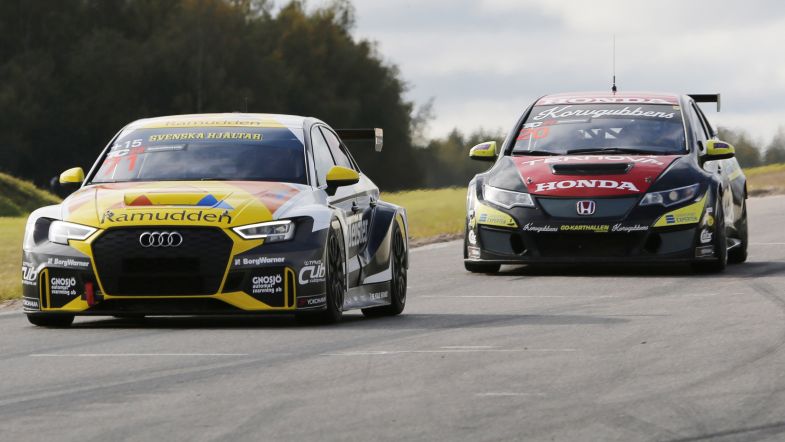 Tobias Brink has slammed MA:GP Honda driver for “ugly” driving, after the title contender lost the victory in Race 1 at Mantorp Park in a final corner move.

Brink had led the whole race and was set to take 15 points out of PWR Racing driver Robert Dahlgren’s points lead, until he came under attack from Andersson, who had biding his time in second until the final few corners.

“Mattias just used me as a brake pad and went in 100% like a torpedo,” said Brink.

“It’s so ugly, we have a championship to compete for and he doesn’t, so he just goes in and does ugly stuff like that. It was ugly, and unfair.

“I maybe was too calm in the last laps, but I thought I could race fairly with Mattias, but it seems apparently not.”

Andersson was unrepentant, saying it was Brink that closed the door on him.

“When it was four laps to go, I decided to get closer if it was possible, and with two laps to go I had a good slipstream on the straight but he blocked very defensively on the inside,” said Andersson.

“I saw he had a problem with brakes and had a bad exit around the back. My plan was to do the same on the last lap, and I went in and he blocked very directly.

“Of course, he was thinking of the championship and he blocked a lot, and I took a chance. Of course, he’s not happy, I understand, I’d be the same, but that’s racing. I’ve had the lead a couple of times into the last corner and lost it myself, so I know how it feels. “

Brink’s team have chosen not to make an official protest, but are hoping the clerk of the course will review the incident.

“We don’t want to protest,” said Brink. “We did it once this year, as we felt the stewards are afraid of taking decisions. It’s happened again, and you can see there’s no room for me at all at the exit. We’ll take it for what it is, and come back stronger. We feel like we would have won the race if it was fair and square.”