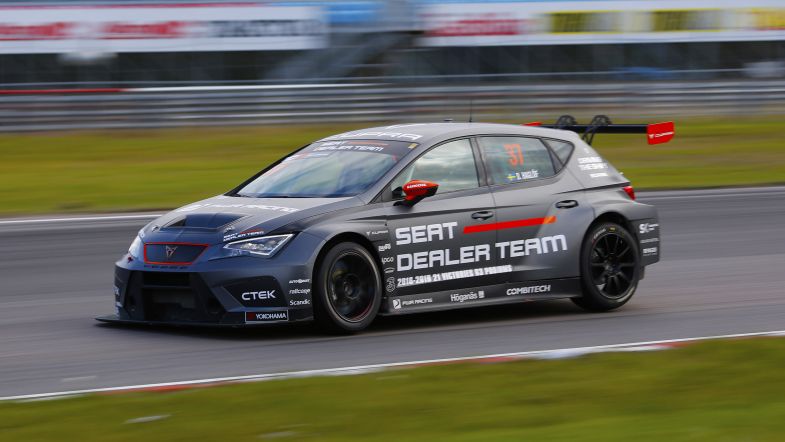 Daniel Haglöf happy with title and optimistic over STCC’s future

Daniel Haglöf was delighted that his driver Robert Dahlgren was able to secure the drivers’ title for PWR Racing in a tough finale at Mantorp Park, where the Cupra TCR struggled with its hefty compensation, and hailed the organisers for keeping the championship alive this year.

Dahlgren picked up a third and a fourth, enough to secure the drivers’ championship ahead of Brink Motorsport’s Tobias Brink, with the team knowing going in that the 80kg of additional weight on the car would hamper their progress.

“It’s a fantastic result. We knew it would be tough with 60kg of compensation weight, so we had to play a strategic game, and it worked out really good,” said Haglöf.

“We knew that coming into this weekend, we knew the weight plays a big factor at this track, and the Honda and Audi were really fast compared to our cars when they have 0kg, and we’re at 60, and Robert (Dahlgren) had 20 more than that, so I was really worried.”

With the TCR Scandinavia championship signing a new promoter for 2020 with MOM Events, and a rebrand back to STCC TCR Scandinavia, Haglöf is optimistic for the series’ future, and also praised the current organisers for keeping the season going despite the last-minute collapse of STCC AB at the start of the year.

“So huge kudos to TCR Scandinavia, and for getting Micke (Bern) aboard. I think MOM Events are the right people to do it. It’s also really good they’ve secured the STCC brand, which is really well known here in Sweden and Scandinavia.