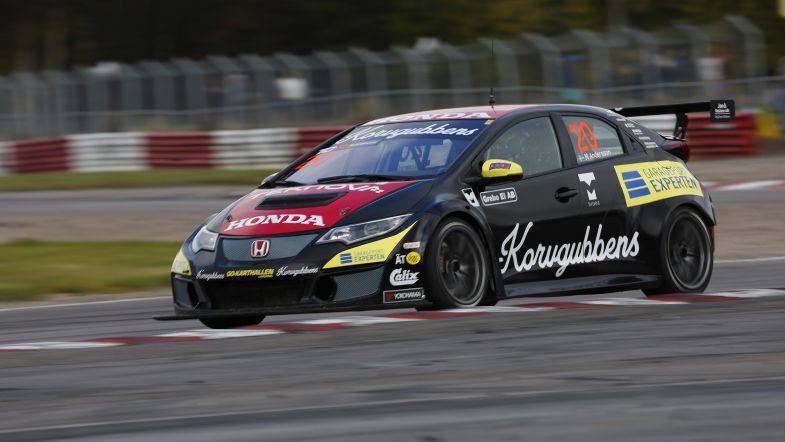 Mattias Andersson delighted with potential last showing for the FK2

Mattias Andersson took a victory and a second place at the TCR Scandinavia championship finale at Mantorp Park, despite some controversy in Race 1 after a daring move on race leader Tobias Brink, and expects to be back on the grid next year, perhaps in a new car.

Making the most of the Civic FK2 TCR’s launch system, Andersson made up one spot at each start in Saturday’s two races, and then worked his way forward to first and second place.

Andersson’s move on Tobias Brink, who was in the running for the drivers’ title, was deemed a fair racing move by the officials, and his second victory of the season stood, while in Race 2 he couldn’t catch the other Audi of Andreas Wernersson and had to settle for second.

“The car felt very good since the morning (when we were fastest), and I was confident I had quite a good race car. In Race 1, we had a good start but I couldn’t get around Brink, and he was driving very hard at the beginning, and I saw in the mirrors that Robert was not there.

“(In Race 2) I overtook Haglöf at the first corner, and then Mikaela at the first long straight, but maybe I pushed too hard to catch Wernersson in the first few laps.

“We were quite close when there were 4-5 laps to go, but he didn’t make any mistakes, and compared to the first race when Tobias started to defend, (Andreas) didn’t, however, I’m happy, I wanted a win, but we couldn’t quite get close enough.”

Andersson’s car has been carrying a “for sale” sign for two race meetings, with the 46-year-old hoping to switch to the new FK8 model.

“We will see what happens next year, at the moment it’s old driver, old car. People want to see the speed of the old car, and I think we’ve shown it this weekend. JAS (Motorsport) want me to get the new car, we’ll see what happens over the winter.”