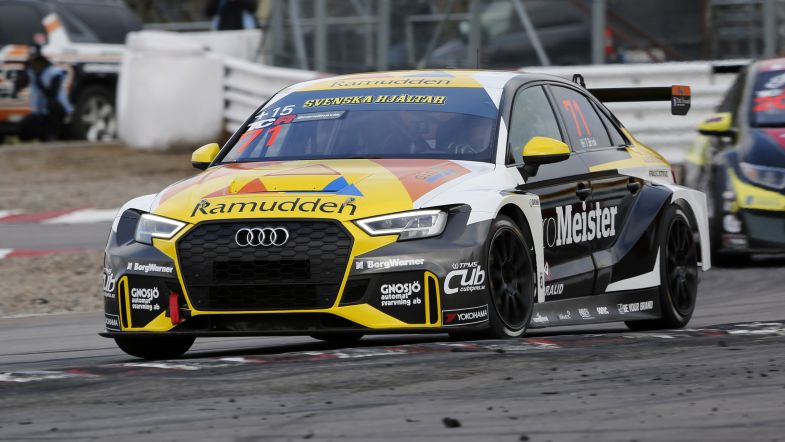 Audi driver Tobias Brink has voiced his disapproval of the driving standards of Mattias Andersson and Daniel Haglöf in the two races at Mantorp Park, losing the win in Race 1 to Andersson, and then going into the barriers in Race 2 in a move which saw Robert Dahlgren claim the title ahead of him.

Brink had put his Audi RS 3 LMS on pole position on Friday, and led throughout the first race, but a loss of pace in the final few laps allowed Andersson’s Honda to close in, and the Civic driver made his move at the final corner, both making side-by-side contact, but in a move which was deemed a racing move by the officials.

In Race 2, Brink had to finish in the top two to stand any chance of winning the title, but was stuck behind Haglöf’s Cupra in sixth during the first laps. He made a move on lap seven, but the two made contact, with Brink ending up in the barriers, while Haglöf continued on, only to be given a drive-through penalty for the incident.

“I attacked Daniel on the outside, but when we were side-by-side it was just bang, and then the wall came really fast,” said Brink.

“We did everything we needed to do on Friday, did that mega lap, but with Andersson doing his torpedo in Race 1, and Haglöf behaving like this in Race 2, I’m disappointed for myself.

“I’m sure in half an hour, I’ll feel a bit different, as we are second in the championship, and we have the gold in the teams’ championship – so it’s been a really good performance from Brink Motorsport coming in as an underdog against the big PWR team.”