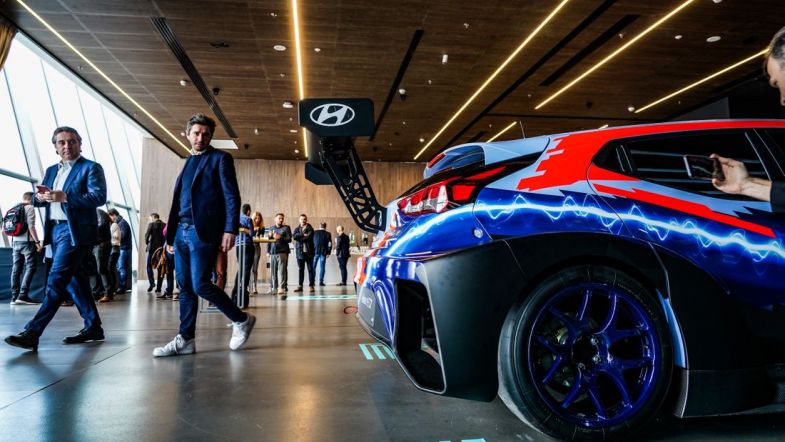 PURE ETCR cars to be charged by hydrogen generators

The new electric PURE ETCR series will have its cars charged between on-track stints by hydrogen generators, organisers have confirmed.

PURE ETCR was launched at an event staged jointly by Marcello Lotti’s WSC organisation and Eurosport Events in Paris on Wednesday, and will feature a dramatic new concept of racing that includes a rallycross-style ”battle group” format.

Speaking at the launch, Eurosport Events boss Francois Ribeiro said that hydrogen generators had been selected as the source of energy for the cars – which are set to be charged at a centrepiece Energy Station in front of fans in the middle of the paddock.

”We had different options,” Ribeiro said. ”Obviously we wanted to avoid diesel generators. We have looked into Aquafuel, which Formula E is using. That could have been a solution, but then Marcello (Lotti) was the first who spotted the idea of hydrogen generators. It was at the Frankfurt Motor Show last September, and he rang me up and said ‘I just saw a hydrogen generator – let me look into that’.

“We loved it because it fits the idea to put the cars in the Energy Station. We don’t want to charge the cars in the box like Formula E is doing. We wanted something different of our own.”

When asked by TouringCarTimes whether that meant local circuits would not need to invest in additional charging infrastructure to accommodate PURE ETCR events, Ribeiro said:

”The less we rely on local power supply, the better. The more we own the product, the more we are in control. The stability of the power supply is absolutely key for safety.”

”At some circuits which are really advanced, like in Copenhagen where 46 % of the electricity in the city is green, so decarbonised, maybe we could think about a different solution. But as of today, the hydrogen generator is the only relevant option.”

In another move to cut its carbon footprint, PURE ETCR have announced that it will make no use of air freight and instead rely on transportation by sea, which it says is “100 times less impactful environmentally.”