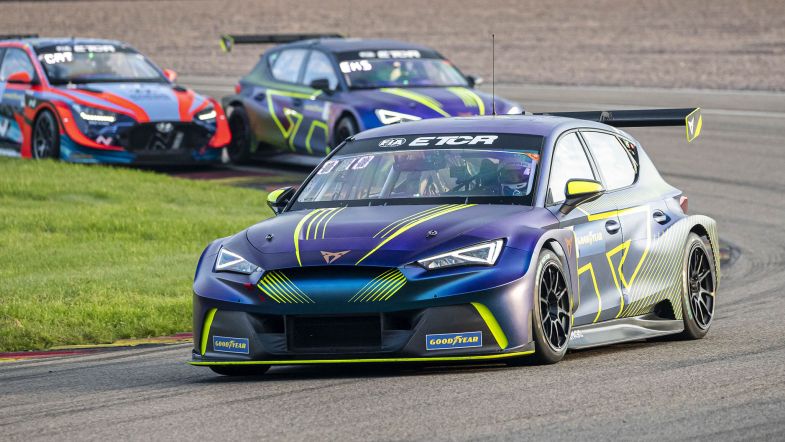 Cupra EKS driver Tom Blomqvist claimed a solid victory in the Pool Fast super final at the Sachsenring. His team-mate Mattias Ekström could manage third, meaning that fellow Cupra driver Adrien Tambay, who will race in the Pool Furious final, is the 2022 FIA ETCR champion.

Blomqvist headed the field into Turn 1, with Ekström trying an impossible outside move. Catsburg settled in third, with his team-mate Vernay right behind.

Soon though, Martin nudged the Frenchman to retake fourth position.

Ekström soon came under fire from Catsburg, with the Dutchman attacking the Swede at Turn 1 on lap two. The Cupra driver went wide, with the Hyundai driver taking second place but also losing out to Martin and Vernay, with Ekström down in fifth position at the start of lap three.

Catsburg looked for a way past Blomqvist at the main straight on lap four, with Martin also joining the duo. Ekström recovered fourth place from Vernay.

The positions remained stable as the drivers saved their power-up for the final stages of the race, with Ekström showing his nose to Martin on lap five, but without completing an overtake.

Venturini overtook Vernay for fifth place as the pack started the last lap, with Blomqvist enjoying a gap at the front.

Martin tried the inside of Catsburg at the last corner, hitting the Hyundai which resulted in the Dutchman spinning.

Blomqvist won ahead of Martin and Ekström, with Venturini in fourth place, followed by Vernay and a limping Catsburg.

Martin immediately apologised to Catsburg on the radio, recognising his fault in the move.

“It was a good race but it’s fair to say congratulations to Adrian (Tambay) as he doesn’t need to even start, he’s already got the points,” said Ekström after the race.

“Thankfully the action was in my mirrors!” said Blomqvist after the race. “I was confident that I could keep Mattias in second place, I had a great car and good tyres, so it was a good result for us.”

After the Pool Fast final Tambay has 495 points, and still has to race in the Pool Furious final, with Ekström at 488 points.

Blomqvist on his part, has scored a perfect weekend, and is now in the fight for the third spot in the championship.

The Pool Furious super final is scheduled for 18:01 CEST.