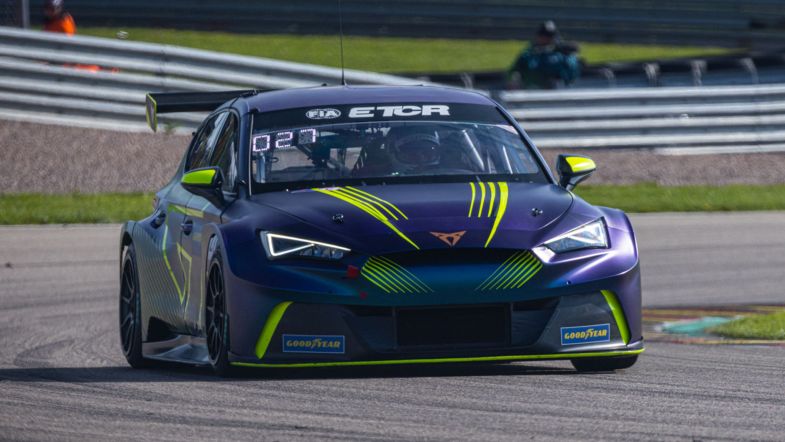 Cupra EKS driver Adrien Tambay claimed a lights-to-flag victory in the Pool Furious super final at the Sachsenring, having secured the 2022 FIA ETCR earlier during the day.

Tambay and Hyundai Motorsport N’s Norbert Michelisz shared the front row. At the start, Tambay took the lead ahead of the Hungarian.

The Giulia ETCRs of Luca Filippi and Bruno Spengler slotted in behind, followed by Cupra EKS’ Jordi Gené and Hyundai’s Mikel Azcona, who got a poor getaway at the start.

Azcona tried to overtake Gené on lap two but the Spaniard, without power-up, was unable to complete the move.

Azcona tried to overtake Gené again at the main straight a lap later, but continued to struggle without the power-up. The Hyundai driver would complete the move on lap four, having already lost a lot of ground to the front runners.

Michelisz attacked Tambay at Turn 1 on lap five but the Frenchman managed to defend. The battle between the top three continued, with all of them saving the last seconds of power-up for the last lap.

Tambay won at the line, with Michelisz and Filippi completing the podium. Spengler was a comfortable fourth, followed by Azcona and Gené.

“It’s a great feeling, I have felt a lot of pressure since the beginning of the weekend, and I’m winning at the end,” said Tambay after the race. “Special thanks to all who trusted me for this, thank you Mattias, my friend, and everyone at the team.”

Tambay completed a perfect weekend scoring the maximum points, tied with his team-mate Tom Blomqvist who wins the “King of the Weekend” crown for clocking the fastest lap time of the weekend.

“I went through so many emotions before this that’s unbelievable,” added Tambay. “2022 has been an unbelievable year for me.

“Starting at Pau was lucky for me, as it’s one of my lucky places. I wanted to become world champion and this was something that nobody could take away from me.”

Tambay has won the title with 535 points, 47 ahead of Mattias Ekström and 101 over Blomqvist who claimed the third spot, meaning a top three lock-out for team Cupra EKS.