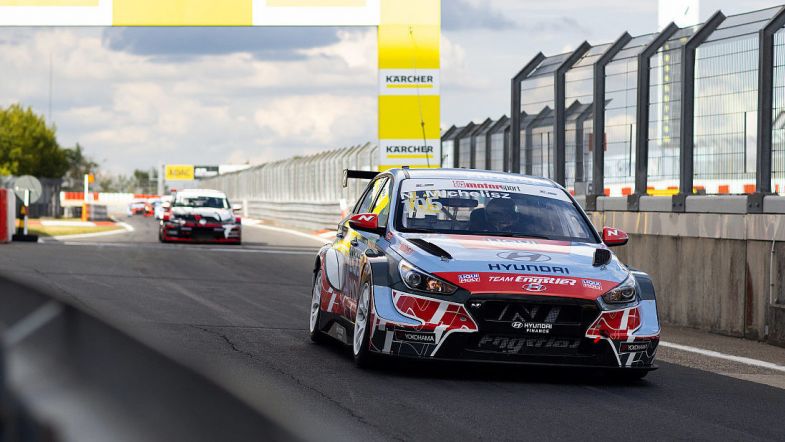 The Team Engstler Hyundai driver started from pole was beaten to the line after fellow front-row starter Harald Proczyk jumped the start in his HP International Hyundai i30 N TCR.

Proczyk was handed a drive through penalty but recovered to finish ninth in the end.

Halder’s team-mate and sister Michelle finished fourth on the road behind the Target Competition Hyundai i30 N TCR of guest entry Andreas Bäckman, but scored points for second in TCR Germany.

While Proczyk leapt into a the lead at Turn 1, there was drama behind as erstwhile championship leader Nico Gruber (Team Engstler) tagged the back of the second Target Hyundai of Jessica Bäckman off the line.

Bäckman was then speared into the side of Antti Buri’s Hyundai, breaking the suspension of Bäckman and costing Buri valuable time. The latter finished two laps down in 13th and last.

That incident forced an opening lap safety car, with Proczyk momentarily leading before serving his penalty. That gave Michelisz the lead, and the Hungarian quickly built a margin over Halder.

Michelisz ended up only 1.6 seconds clear of the Honda by the finish but was largely untroubled.

Behind, things was close but uneventful, with the battle for sixth between Jan Seyffert and René Kircher the only real action on track.

The pair ran closely for a number of laps before Seyffert eventually found a way past Kircher to finish sixth, just over a second ahead at the flag.

Proczyk’s recovery was impressive as the Austrian pulled off overtakes on Dziugas Tovilavicius at the final chicane for 10th before slipping past the Volkswagen Golf GTI TCR of Harri Salminen at the same corner for ninth.

With the top eight cars from qualifying in reverse setting the grid for tomorrow’s second race of the weekend, Gruber will start from pole position alongside Jessica Bäckman, with both looking for redemption.

Race two at the Nürburgring is scheduled to start at 11:25 CEST tomorrow.