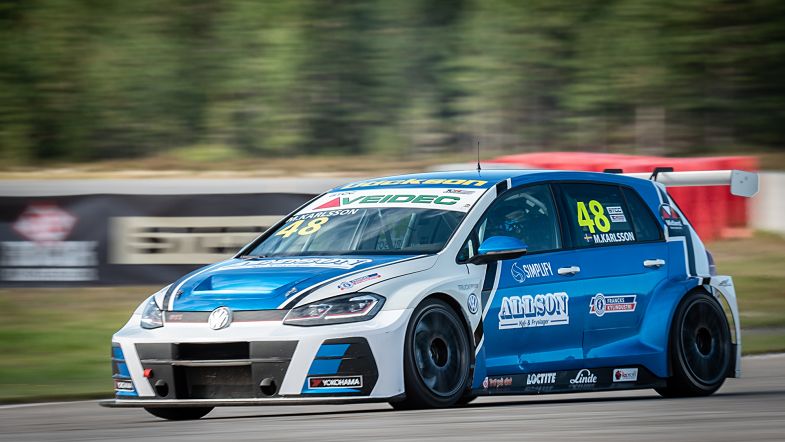 Mikael Karlsson claimed his maiden STCC TCR Scandinavia victory in the third and final race of the Skellefteå weekend, withstanding hard pressure from Tobias Brink during the final four laps.

Karlsson claimed the lead from second on the grid with Brink Motorsport drivers Hannes Morin and Tobias Brink slotting into positions two and three after passing Oliver Söderström on the opening lap.

Dahlgren came to a halt at the exit of the hairpin and was forced to sit on the asphalt next to his car for the remaining part of the race, effectively removing the best overtaking opportunity of the circuit as the stewards chose to have a stationary yellow flag instead of removing the car.

There was further action in the opening stages of the race as Huff made a mistake and collected Kågered Racing driver Andreas Ahlberg when returning to the track. Both drivers had to pit for repairs, with Ahlberg retiring with rear suspension damage while Huff was able to return to the track to score eighth place, two laps down.

Brink made his way past Brink Motorsport team-mate Morin on lap five to start a chase on leading driver Karlsson.

The Audi RS 3 LMS driver caught Karlsson with three laps to go. Brink tried hard to get past, but Karlsson managed to stay ahead to win the race by just 0.281 seconds.

Just eight cars were classified following the eventful opening part of the race.

Dahlgren remains on top of the standings thanks to his two victories earlier today on 100 points. Huff and Brink share second place on 88 points, with Söderström fourth on 84.

The next and penultimate STCC TCR Scandinavia race of 2020 takes place at Mantorp Park on October 2-3.