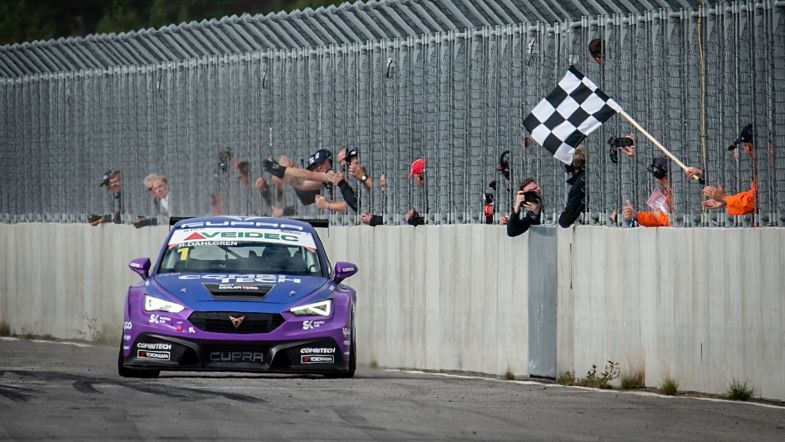 But the reigning champion had a much tougher this time after damaging his front suspension on the opening lap, with a severe vibration issue building throughout the race.

Two drivers had to retire before the formation lap as Albin Wärnelöv pulled into the pits with an engine issue.

Honda driver Mattias Andersson suffered a broken right front suspension while heading out to the grid and was forced to watch the race from the sidelines.

Dahlgren made a perfect start as Tobias Brink found himself under pressure from Lestrup Racing Team driver Rob Huff on the opening lap.

But Brink managed to pull away and started to close in on Dahlgren as the race neared its end.

Just as Brink looked to be close enough to attack Dahlgren for the lead, the Cupra driver seemed to find some extra pace and managed to keep ahead to win the race by nine tenths of a second.

And the Lestrup Racing Team driver was involved in an incident with Mikaela Åhlin-Kottulinsky on the opening lap, an incident the stewards are currently looking on.

Kågered Racing driver Andreas Ahlberg lost two places to Morin and Söderström on the opening lap to finish the race in sixth ahead of his team-mate Mikael Karlsson.

Emil Persson and Åhlin-Kottulinsky rounded off the top ten.

The third and final race of the weekend starts at 18:15 CEST.