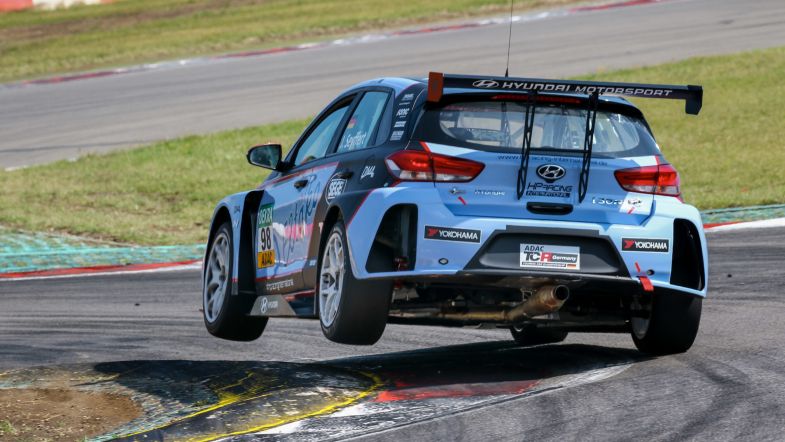 Team Engstler driver Nico Gruber had a terrible race, starting from pole position but dropping down from the lead to finish 14th.

And Gruber’s Hyundai team-mate Antti Buri had an equally poor race, dropping from the fight for the very top at the beginning of the race to finish 13th.

Championship newcomer Felix Wimmer also had a difficult race, making a strong start from third on the grid to claim second into the first corner.

But the Cupra León Competición driver made a mistake and then dropped down to the bottom of the field before the end of the first lap. Wimmer made progress late in the race to finish eighth.

Honda drivers and bothers Dominik and Marcel Fugel were two further drivers with a nightmare of a race.

Dominik Fugel was involved in a fight with René Kircher, with contact between the two resulting in a puncture and retirement for the Honda driver.

Marcel Fugel headed into the pits with 24 minutes left of the race due to a technical issue.

Seyffert fought his way up into the lead after a poor start to the race, passing Gruber on the outside at Turn 7 for the lead with 18 minutes left of the race.

As Gruber continued to drop down the order, the fight for third place escalated between Albert Legutko, Kircher and Dziugas Tovilavicius with five minutes left of the race.

Legutko managed to get past Kircher at the hairpin with just three minutes left. Tovilavicius followed past up into fourth not long after.

And Kircher found himself in trouble, dropping further to finish in ninth position.

Harri Salminen crossed the line in sixth position for Positione Motorsport and Szymon Ladniak in seventh position, while Wimmer rounded off the top eight.

The second and final race of the Hockenheim weekend starts at 11:50 CEST tomorrow.