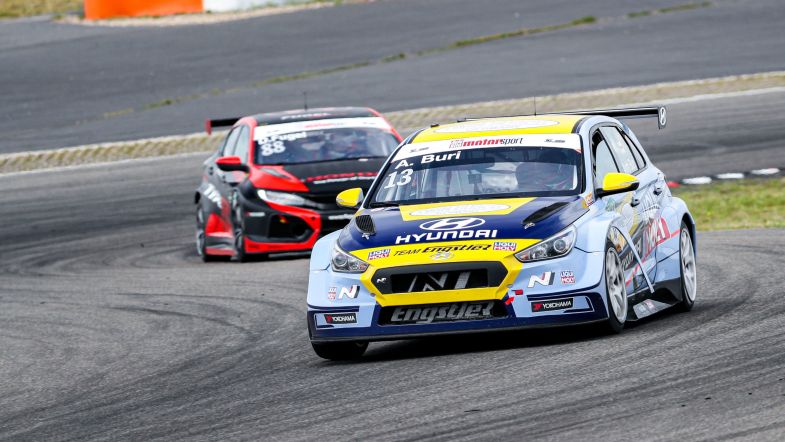 Antti Buri won the second TCR Germany championship race at Hockenheim that was interrupted by a safety car session following a crash involving two Hyundai drivers on the opening lap.

Harald Proczyk started from the reversed grid pole position but was overtaken by Honda driver Marcel Fugel in the drag race to the first corner.

Proczyk was then hit by Team Oettinger driver René Kirscher at Turn 1, saving a massive slide.

The HP Racing International driver rejoined the track further down the order and seemed to misjudge his braking into Turn 2, hitting Team Engstler driver Gruber hard from behind.

The contact resulted in a retirement for both Hyundai drivers and the safety car headed out on track as the cars were recovered.

Both HP Racing International drivers retired on the first lap as Jan Seyffert limped back into the pits with a yet to be identified issue.

The race was resumed on lap five as Buri started to pile the pressure on race leader Marcel Fugel.

The Finnish Hyundai driver caught the German Honda driver on lap ten and made his move at the exit of the hairpin to claim a lead he was not to lose.

Marcel Fugel’s brother and team-mate Dominik Fugel meanwhile was making progress up through the field, passing Kirscher for fourth on lap 11 with some contact.

But the stewards judged the pass unfair and Dominik Fugel had to give the position back.

Dominik Fugel made the move stick four laps later and was then let past by his brother up into second position on the penultimate lap.

Buri won the race by close to three seconds ahead of Dominik Fugel and Marcel Fugel.

Dominik Fugel holds the championship lead on 95 points, four ahead of Proczyk and six ahead of Buri.

The next TCR Germany round takes place on October 3-4 at Sachsenring.