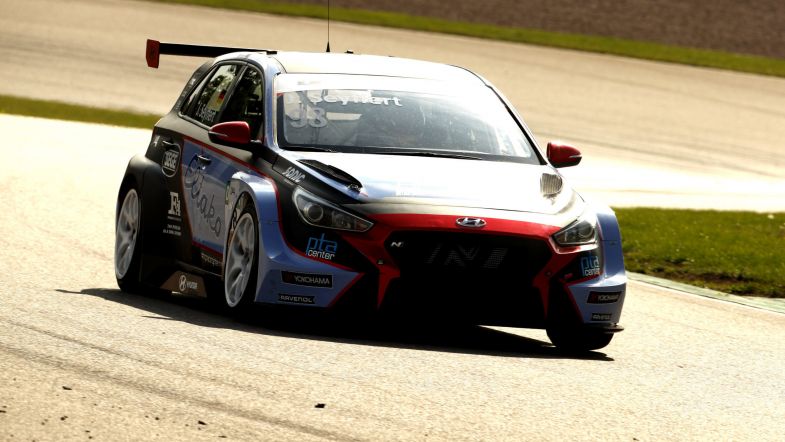 HP Racing International’s Jan Seyffert will start the opening TCR Germany championship race at the Sachsenring from pole position after a dominant performance in qualifying.

The Hyundai i30 N TCR driver set a time of 1:26.963 to go over a tenth of a second quicker than second-place René Kircher.

It wasn’t long before Seyffert surged to the top of the table with a 1:26.792, to go over a second quicker than Fugel.

Seyffert’s time stood until the end of the opening segment of qualifying.

Others took some time to get into Q2, such as Seyffert’s HP Racing International team-mate Harald Proczyk. The 2018 TCR Germany champion had only set one lap-time with just ten minutes of the session remaining but jumped up to eighth before improving to second.

The Austrian was still over a second adrift of Seyffert, but at least he was secured of a place in Q2, unlike fellow title contender Antti Buri, who missed out.

The Finn in his Team Engstler Hyundai i30 N TCR completed seven laps, but none were good enough to make it into the top ten; he will line up 11th and last for both of this weekend’s races.

Having struggled so far in practice, the other Engstler Hyundai of Nico Gruber just made it into Q2 at the death, with the Austrian putting in a lap-time good enough for eighth, just two-tenths quicker than Dziugas Tovilavicius’s Volkwsagen Golf.

Despite his struggles, Gruber ended up third quickest in his i30 N TCR, ahead of Marcel Fugel’s Honda.

Dominik Fugel, who topped both of Friday’s practice sessions was only eighth, but this means that the German is on pole for Sunday’s reversed-grid second race of the weekend.

Proczyk will start Race 1 from fifth on the grid, which translates to fourth for Race 2, while Moto2 star Marcel Schrötter was an outstanding sixth fastest in hus Engstler Hyundai.

Next up for TCR Germany is the opening race of the weekend, which is scheduled to take place later on today at 10:50 CEST.