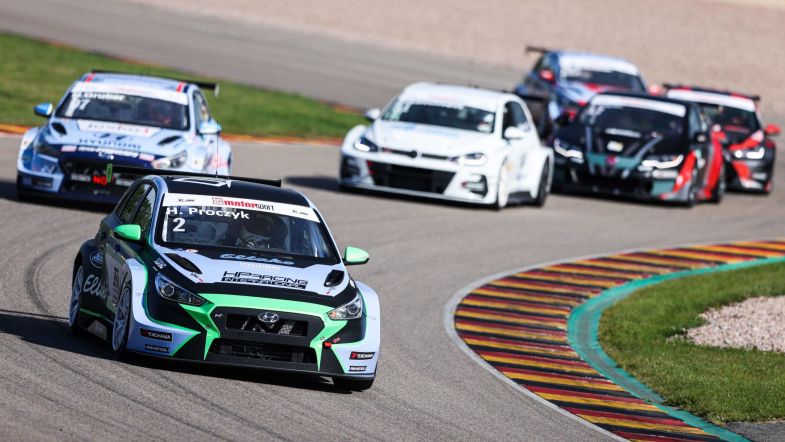 HP Racing International’s Harald Proczyk claimed his second TCR Germany championship victory of the season with a commanding performance in Race 2 at the Sachsenring.

The Austrian, driving a Hyundai i30 N TCR fended off the attentions of points leader and Race 1 winner Dominik Fugel by just over seven-tenths of a second at the flag, with Marcel Fugel completing the podium in the other ADAC Sachsen Honda Civic Type-R TCR.

Proczyk got a superb start from fourth on the grid to catapult his Hyundai i30 N TCR into the lead by the first corner, as pole-sitter Harri Salminen slipped behind the Austrian and Race 1 winner Dominik Fugel.

Marcel Fugel also got by Salminent for third before the end of the opening lap, which was interrupted by a safety car intervention following a heavy crash for Albert Legutko.

The Honda Civc Type-R driver flew off the road and across the gravel trap at Turn 8, hitting the barriers at high speed.

Legutko was unharmed in the incident, but his race was over before the end of the first tour.

Proczyk led again at the restart but couldn’t make a break on Dominik Fugel, the latter staying just half a second adrift of the 2018 TCR Germany champion.

Making inroads into the leading trio was Antti Buri in the Team Engstler Hyundai i30 N TCR. The Finn endured a difficult qualifying and started last in each of the two races.

But Buri was a man on a mission in the early stages and worked his way up to fourth place after successful overtakes on Marcel Schrötter and Salminen.

Salminen then came under attack from the Volkswagen Golf of René Kircher for several laps, but his race was all but destroyed as the pair made contact at Turn 1, putting Salminen into the gravel.

Kircher also suffered damage in the incident and dropped down the order, while Salminen made it back to the pits to retire.

Although the gap between Proczyk and Fugel was never more than a second during the race, the HP Racing International driver looked comfortable throughout.

Further back, Buri eventually worked his way onto the back of Marcel Fugel inside the final three minutes, the Hyundai arguably the faster car in the hands of the Finnish driver.

Buri used the grass on the entry to Turn 1 in an effort to make the cut-back move on Fugel work, but the Honda defended admirably.

Fugel held on to claim the final place on the podium, due in part to Buri dipping a wheel in the gravel of the final corner on the penultimate lap, which gave the Honda crucial breathing space.

Behind Buri at the finish, Jan Seyffert finished fifth ahead of guest driver Marcel Schrötter, while Nico Gruber claimed seventh for Team Engstler.

Dziugas Tovilavicius was eighth ahead of Kircher, while Salminen and Legutko were the only retirements.